Keeping track of the changes made to your database objects is a key part of any SQL database security strategy or compliance policy including, among others, the Health Insurance Portability and Accountability Act, Sarbanes-Oxley, Payment Card Industry Data Security Standard or the European Union Data Protection Directive. However, even if your IT environment doesn’t have to comply to stringent security rules, being able to identify what database object has been changed, who has changed it as well as the exact time of the change, is invaluable in troubleshooting any schema related problems down the road, such as broken dependencies. So, how does one audit SQL Server schema changes?

However, this approach comes with certain caveats. For instance, you can use DDL triggers to audit CREATE, DROP and ALTER TRIGGER statements, but a privileged user may issue the DISABLE TRIGGER command and effectively render auditing useless as DDL triggers can’t capture it; namely, a privileged user may change an audited object, then disable the DML triggers on the table which stored the captured changes, delete the rows which hold the details on the changed object and enable the DML triggers again. This way a malicious user can effectively wreak havoc on the database schema without being detected by the auditing system. Even if you are the only privileged SQL Server user, this kind of auditing system has the inherent disadvantage of not being able to report on any change made before it has been set in place. So, is there any effective way to audit SQL Server schema and object changes?

Fortunately, yes. The transaction log keeps a record of each change made to the database including information on when the change was made and who made it. The best part is – due to its nature, that information cannot be tampered with. But, there’s a catch – the transaction log isn’t humanly readable on its own. This is where ApexSQL Log comes into play

The changes that meet the specified criteria, along with their details, will be listed in the application’s main grid. To narrow down the result set further, use the Grid filter in the left pane 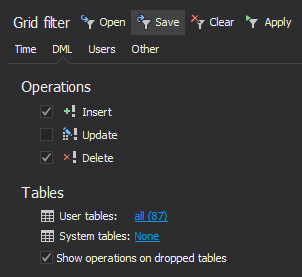 In summary, if you want to ensure that no schema or object changes have been made to your SQL Server without your knowledge, examine its transaction log with ApexSQL Log

Please download the script(s) associated with this article on our GitHub repository.

Please contact us for any problems or questions with the scripts.