As part of the ACID test, isolation is carried out by locking affects objects and as such, isolation can affect one or more data rows until the SQL Server transaction that is executed against that object is committed. This means, in practice, that by locking the object, SQL Server will prevent any other process from making any change against the data in that object until the lock is removed, either by committing the change or rolling it back.

Imposing the lock over an object will cause any other process that imposes a request against the locked object to wait until the lock is removed, which will delay execution of that process. The state when a transaction is waiting for the lock to be removed or stopped is what is known as a block. SQL Server is designed to work this way and, as such, blocks are not inherently problematic. Therefore, only when a high level of blocks is detected on SQL Server or in a case in which blocks occurs that require excessive amount of time to be resolved should it be treated as a potential issue

These scripts will be used for creating a SQL Server block

First, execute Script 1, but only the part highlighted in yellow (do not execute the COMMIT command). The script will start a transaction and it will place a lock on the specific rows in TableX

This simple example illustrates a situation when one transaction, that is in progress, can BLOCK one or more processes that must wait until the transaction with exclusive lock completes or is rolled back

So how do we identify instances of SQL Server blocking? There are a couple of ways to do this in SQL Server:

Activity monitor is an SQL Server Management Studio tool that enables user to see details of existing SQL Server connections, and it can be used to show information about the open processes and locks on SQL Server resources. 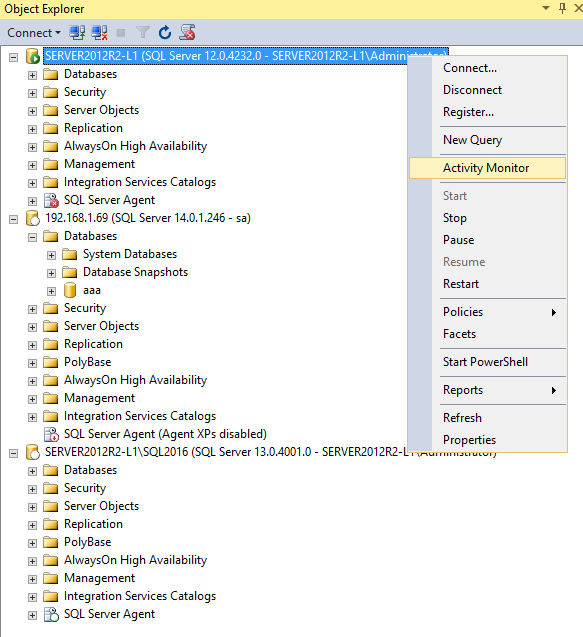 Expand the Processes and locate the process that is waiting. Once the process is located, take a look at the Blocked by column to find the process ID that is caused the blocking

Now when the process, that is causing the blocking, is identified, it has to be located in the same Processes page

Now when the information about the process that is causing the blocking is found, the user might opt to kill that process or to allow it to run until completes. To Kill the process, right click on it and select Kill process

The dynamic management view, sys.dm_exec_request, is used for identifying the SQL Server blocks. It can be used to list currently active blocks by executing the following query

To terminate the blocking session, ID 74 in this case, use the KILL command

But these native SQL Server methods can be used only for detecting and identifying active blocks. In many situations, when a block is detected and identified, it is important to know whether this constitutes normal behavior and whether it occurs rarely or only once. Without such information, it is not possible to perform required troubleshooting, simply because no historical data about blocks are available, such as blocking frequency and the extent of blocking