A database is one of the most important parts of every information system and therefore is an often target of hackers. Encryption is the process of obfuscating data with the use of a key and/or password making the data unintelligible to anyone without a corresponding decryption key or a password.

SQL Server has a hierarchical encryption infrastructure where each layer in the hierarchy encrypts the layer below.

The next level in the hierarchy is a certificate that can contain a private key that is protected by the Database Master Key, or an asymmetric key (note that if using an asymmetric key for encrypting the backup data only asymmetric keys that reside in the Extensible Key Management (EKM) provider are supported). 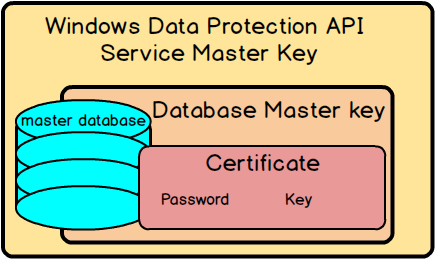 Data Encryption Standard, also known as the Data Encryption Algorithm (DEA), is developed in the early seventies and published in 1977. Data Encryption Standard is a block cipher that encrypts data in 64-bit blocks. DES is a symmetric algorithm meaning that the same algorithm and a key are used for both encryption and decryption. A key length of 56-bits. A brute force DES-cracking machine can find a key in approximately 3.5 hours. And with time DES will only become less secure.

In order to improve security, there are DES variants such as Triple DES (3DES). Triple DES is a way of using Data Encryption Standard encryption three times and has a key length of 168 bits, but it’s also has been proven to be ineffective against brute force attacks.

Advanced Encryption Standard (AES), also known as Rijndael which is its original name, is a specification established in 2001 for the encryption of electronic data.

Advanced Encryption Standard consists of three block ciphers, AES 128, AES 192 and AES 256 and each block cipher encrypts data in 128 bits blocks. A key length is 128, 192, and 256 bits, respectively. AES is, like DES, also a symmetric algorithm.

If the ##MS_DatabaseMasterKey## row does not exist, use the following query to create it:

Next we need to create a certificate:

If a certificate is not backed up prior to backing up a database in T-SQL the following warning will be displayed in the results:

To back up a certificate and master keys use the following queries:

Now we finished preparations for creating an encrypted backup and we have all four files backed up:

To backup a database with encryption by using T-SQL the encryption algorithm and certificate need to be specified:

Scheduling an encrypted backup requires a SQL Server Agent job to be made.

If restoring a database from an encrypted backup file is performed on the same SQL Server instance the restore operation is performed as usual as the keys and the certificate are already contained in the master database and opened automatically in the process of decryption:

To perform an encrypted backup in SQL Server Management Studio:

To restore an encrypted backup in SQL Server Management Studio:

The Back-Up Database task in Maintenance Plans in SQL Server 2014 also has the option to take an encrypted backup.

To perform an encrypted backup by using Maintenance Plans:

To execute the maintenance plan right click the plan under Maintenance Plans option and select execute: 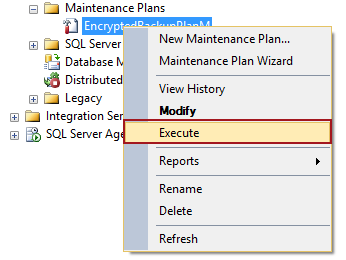 Although the backup process can be scheduled as a SQL Server Agent job from the Maintenance Plan Wizard the disadvantage of Maintenance Plans is that there is no ‘Restore Database’ task. For the purpose of restoring an encrypted (or any) backup, the Execute T-SQL Statement Task has to be used by adding a restore T-SQL script in the task.