ApexSQL Doc features a built-in graphical dependencies viewer that can assist you in visually conveying your database dependencies in the final document. 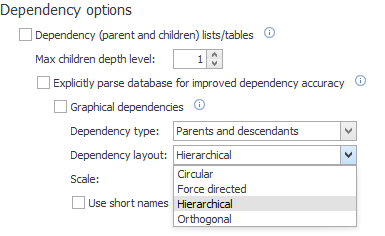 In addition to including visual representations of object relationships, dependency relationship tables can be included, checking the Dependency (parent and children) lists/tables option:

The Dependency type option controls which relationships are included in the generated diagrams:

Depending on the choice made, the generated diagram will change.

The Dependency layout option controls how ApexSQL Doc will organize the generated dependency diagrams in your SQL Server documentation:

Visualization is ideal for quick analysis of existing dependencies, especially when, for example, there is a need to explore the model with multiple layers of views or tables. With that in mind, ApexSQL Doc offers a very useful and clear visualization of various objects and how they are interconnected as a part of a SQL server documentation.