In this article, we will explore what is code coverage and then we will learn, how we can measure SQL Server code coverage.

Code coverage is an indicator that shows how much of the code lines have been covered by the tests. Why this value is important because this value provides us to figure out if the tests cover the code lines extensively. On the other hand, the following question might appear in your mind:

According to my thought, the answer to this question is absolute “yes” because the developers can evaluate their code by looking to these metrics in terms of the code quality. In some cases, the developers or the program managers appraise the reliability level of the code with code coverage measurement. And also, nowadays it demands highly in the software development ecosystem.

Therefore, if we are developing a SQL database, and if we also want to achieve the above benefits, there is no doubt we should use the SQL unit testing. At this point, how many lines of the codes are covered by unit tests becomes more important for efficient and advanced SQL unit testing. That’s why, if we want to obtain more qualified and bugless SQL codes, we should measure SQL Server code coverage. SQL Server code coverage concept is based on this essential idea.

SQLCover is a code coverage tool which helps to measure, how many percentages of database objects (stored procedures and functions) code lines have been covered by the tests. Additionally, SQLCover is an open-source project which is written by Ed Elliott (We have to thank Ed Elliott for such a project in an open-source) so that we can enable to change source codes. SQLCover library can be used in the PowerShell scripts or in the .NET projects.

Launch the SQL Server Management Studio and right-click in ScienceDatabase and then choose to Install tSQLt option in the Unit tests menu.

In the Install tSQLt window, we will select the Built-in tSQLt installation type and click OK.

And also, we can use the following tSQLt framework installation methods in the ApexSQL Unit Test.

We will allow enabling the following database settings;

As you can see that we installed the tSQLt framework very easily in the two-step.

Creating and running the unit test

The ScienceDatabase does not involve any unit test so we will create a new unit test.

When we again right-click over the ScienceDatabase, the New test option appears in the Unit tests menu. We will choose the New test and then start to create a unit test. In the New test window, we can create a new test class or choose the previously created test classes in the drop-down menu.

After the creation of the test class, we will start to create a new unit test. Give a name to the unit test and then click OK.

After that, ApexSQL Unit Test creates a new unit test which we named it. This unit test stored procedure is shown in the SSMS query editor automatically so that we can start to code the unit test. Through the following query, we can create the unit test.

We will click the Unit Test explorer to run the unit test.

In the Unit test explorer window, we can run individual unit tests.

At the same time, we can run the whole unit tests which are contained by the test class.

Now we will run the fnCalcFahtoCelsius_ExpectedRightCelciusVal unit test and analyze the result of the unit test in the result panel. 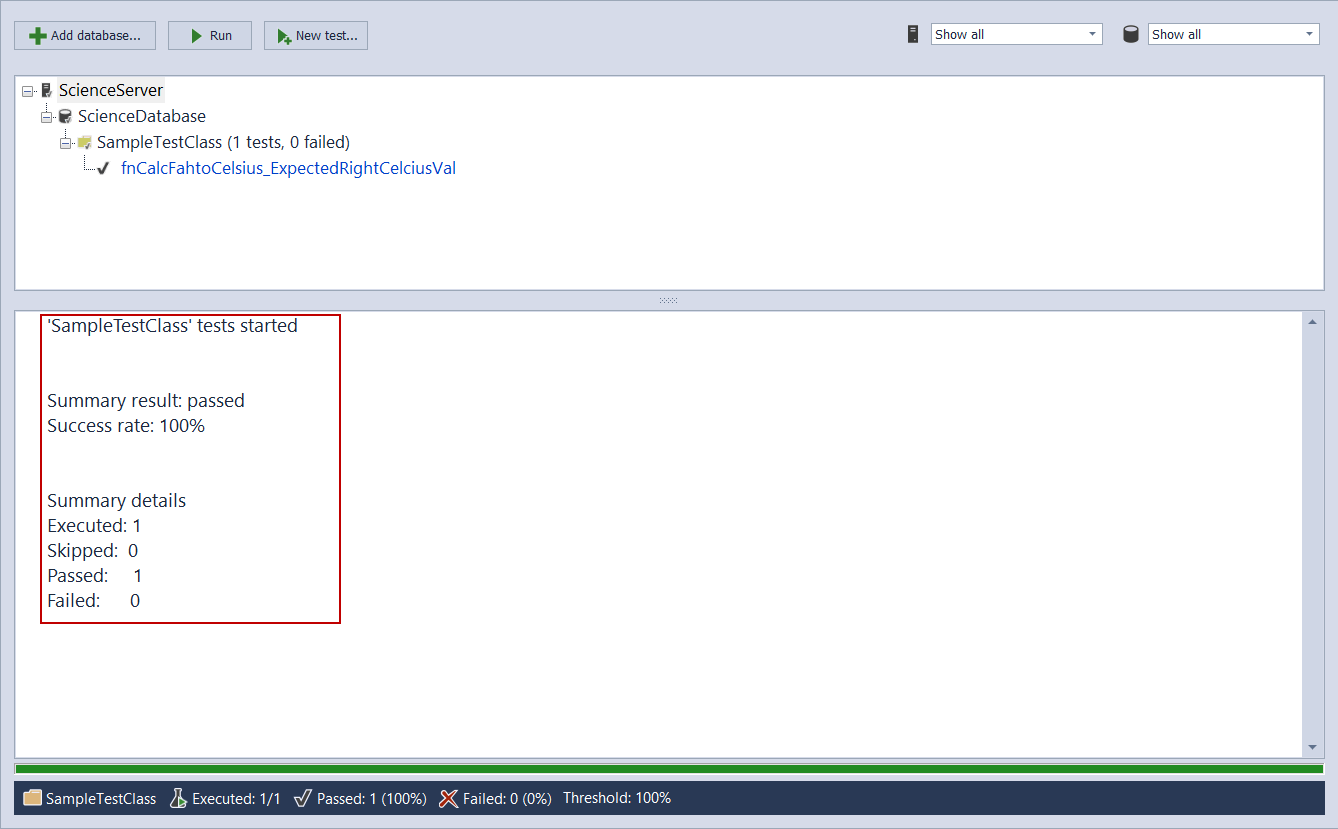 The above result screen image explains that the fnCalcFahtoCelsius_ExpectedRightCelciusVal test has passed.

At the beginning of this article, we mentioned SQLCover and now we reinforce this information with practical examples. As the first step of this demonstration, we download the required tools from the SQLCover GitHub repository. We will create a very simple PowerShell script which is using the SQLCover library so that we can create an HTML report. This report will offer the detailed measurement result of the SQL Server code coverage for the ScienceDatabase database.

At first, we will open a PowerShell ISE for scripting and save it to the same folder with the SQLCover.dll and SQLCover.ps1 as RunSQLCover.ps1. Then through the following PowerShell script, we can generate the HTML report.

Now, we will tackle the PowerShell script line by line

In the above codes, we specified the SQLCover.dll and SQLCover.ps1 script paths.

In the above code block, we defined the connection string of the server and database name. Then we set the unit test query. In our script, we specified to run all unit tests.

The above code specifies, where the HTML report will be created.

The HTML base coverage report is saved into the specified path when we run the PowerShell script. Lets’s open this report and discuss it. 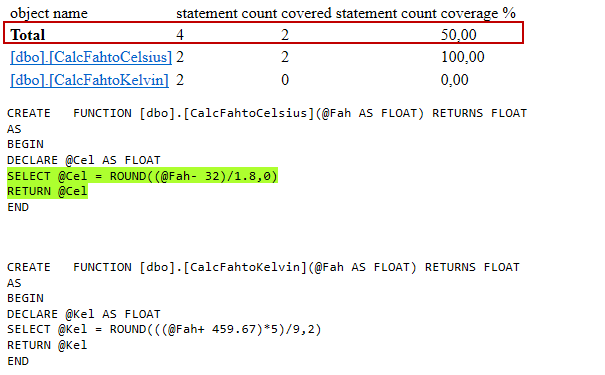 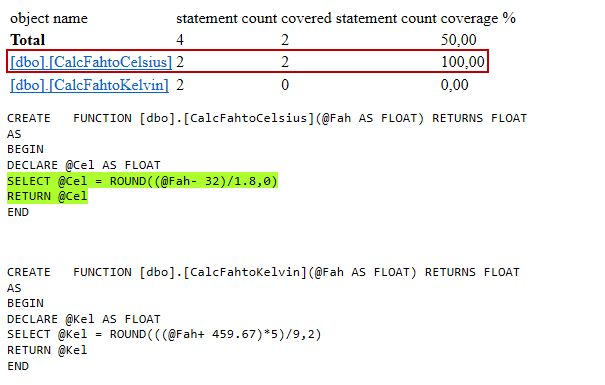 On the other hand, if we analyze the CalcFahtoCelcius scalar-valued function, it’s measurement value is 100% because of the whole executable statements have been covered by the unit test.

Now, we will overlearn this idea with a more complicated example. At first, we will make some changes to the CalcFahtoCelsius function. These changes consist of some ‘if’ statements, and also it includes comment lines that point to the numerated executable code lines. Let’s run the following query and alter the CalcFahtoCelsius scalar-valued function. Then we will re-generate the HTML report with the help of the same PowerShell script. 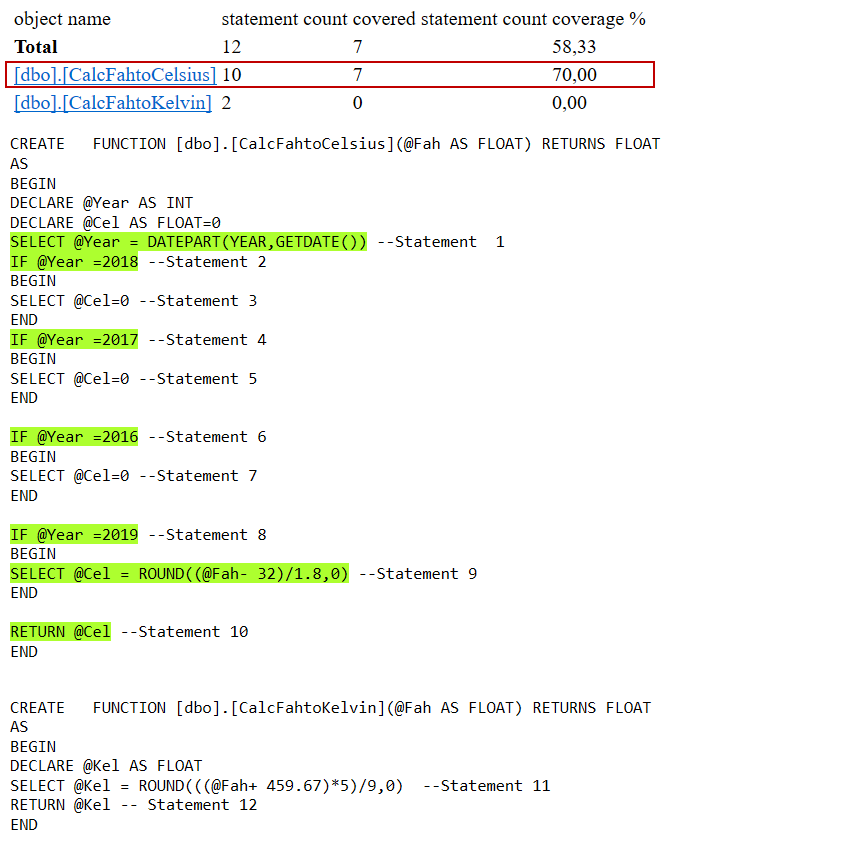 The above image explains everything very clearly to figure out the SQL Server code coverage measurement methodology and which statements to be considered in the calculations.

At the same time, the report is indicating some code lines highlighted in green. It specifies, which code lines have been executed during the unit test execution period. We should notice one thing about SQLCover, it does not reckon some codes during the SQL Server code coverage measurement. T-SQL statements like BEGIN, DECLARE, etc are not considered by SQLCover because these codes actually do nothing so it can be eliminated in the SQL Server code coverage measurement.

In this article, we learned the adaptation of the code coverage measurement approach to SQL Server. If we use SQL unit testing and SQL Server code coverage at the same time, this combo usage will improve our code quality and reliability. Also, we can measure how many lines of the code exercised by the SQL Server unit tests. As briefly, we can repeat the idea “If you can’t measure it, you can’t improve it”.