ApexSQL Source Control is a SQL Server Management Studio add-in that will be used through this article. It allows you to put a database under version control, commit all changes to the repository and easily revert any committed change from the history and apply it against a database.

Let’s introduce this particular use case of how to browse through the history of committed changes and revert specific changes from the history. We’ll have a sample database Pubs, linked to the repository with all objects initially committed. In order to have a proper list of changesets in the revision history, we’ll make the following changes (all changes are made against the jobs table) and commit them in a way described below:

Assuming that the 4th commit, where INSERT and SELECT permissions are granted to the user (SteveBrown) was not a good change, we’ll show how to browse through the commit history, find the version of the jobs table that contains the change related to permissions, revert that version and apply it against a database.

Browsing the history of the specific object

In order to browse the object history, right click on the jobs table in the Object Explorer pane and select the Object history item from the context menu: 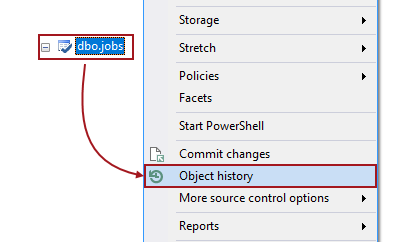 The Object history form shows the list of all changesets in the upper left section (marked in the image below), that contain the selected object (in this case the jobs table).

The upper right section shows all the objects committed within a single changeset (marked in the image below), including the specified object, which is also highlighted. Since we changed the jobs table for the purpose of this article, that is the only object that will be shown. In case other objects are committed, in the same changeset, the user will be able to view the list of the objects in the upper right section, but other objects cannot be selected due to a fact that this is the object history dedicated to the jobs table only, so the jobs table will be highlighted by default. 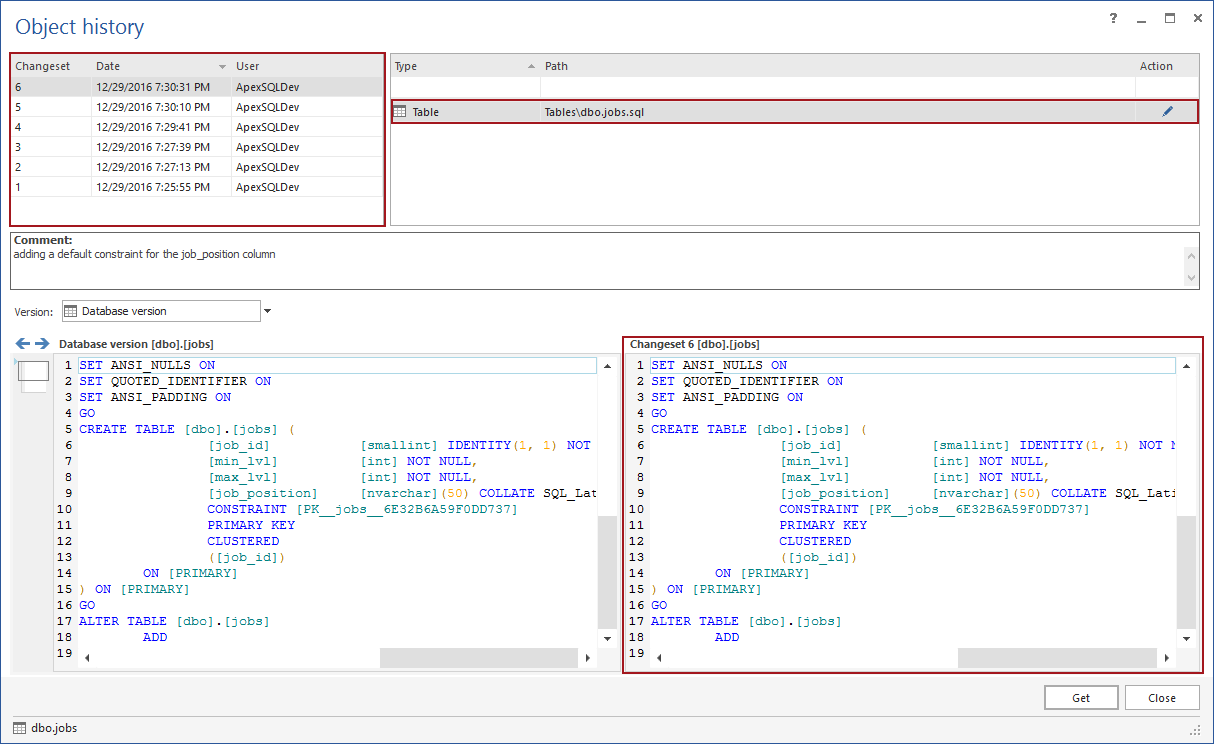 Picking any other changeset from the list will show all the containing objects and a SQL script will be shown in the lower right section for the currently highlighted object. This way, the user can easily review the history of the committed changesets, find out which version of an object is committed in which changeset, when, and who performed the commit. 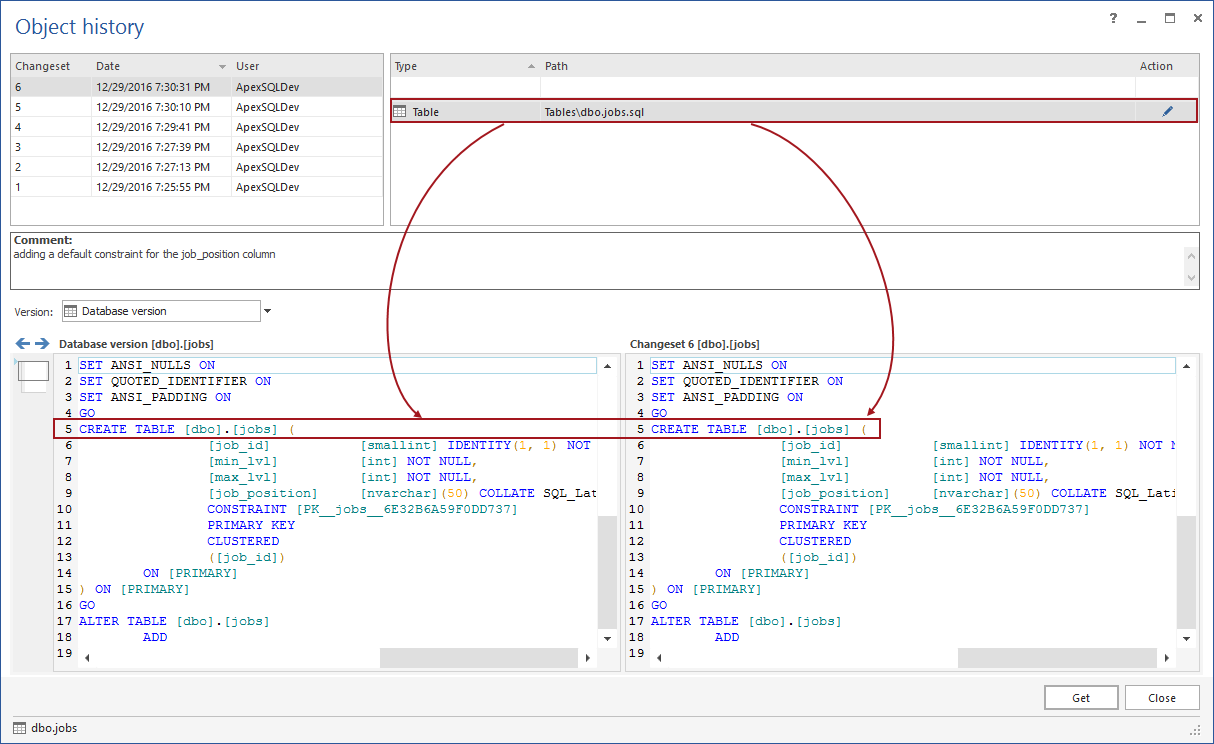 The two windows show the DDL of each version, but also do a character level comparison of the scripts

For instance, if the 2nd changeset is selected from the drop down list, the result is as follows:

Reverting specific version from the history

We want to revert a version of the jobs table where the SELECT and INSERT permissions are not granted to the user, because that user shouldn’t have been given those permissions. We’ll treat this as a “bad change”, for the purpose of this article, so we’ll revert the version of the jobs table where such permissions are not granted. Since the “bad change” was committed in the 4th changeset, we’ll highlight the previous changeset (3rd) in the upper left section of the Object history form: 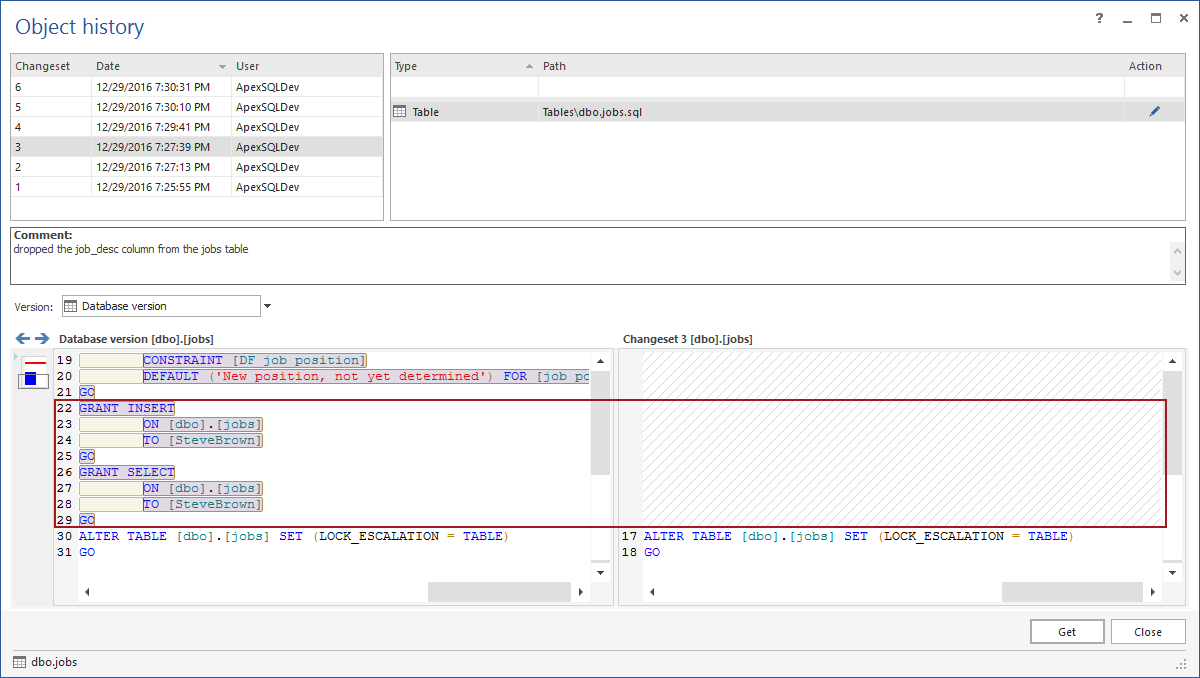 By applying the version from the right side against a database, we’ll revert the jobs table to a state where permissions are not granted. Note that when applying a version of the jobs table from the 3rd changeset, changes committed in the 5th and the 6th changeset are about to be reverted. See below on how to avoid this.

Applying changes against a database

In order to apply this change, we’ll click the Get button, in the lower right corner of the Object history form.

This gives us the exact sequence of tasks that will be performed against a database: 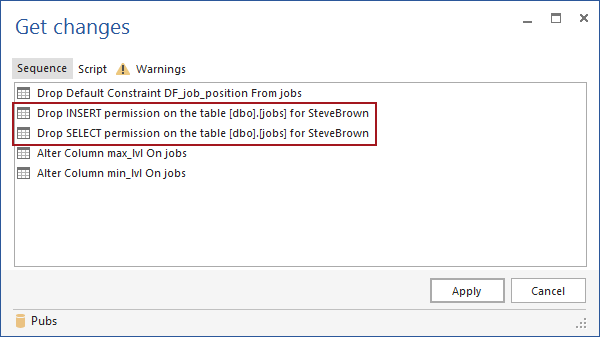 The Script tab shows the actual SQL script that will be executed against a database in order to revert the selected change: 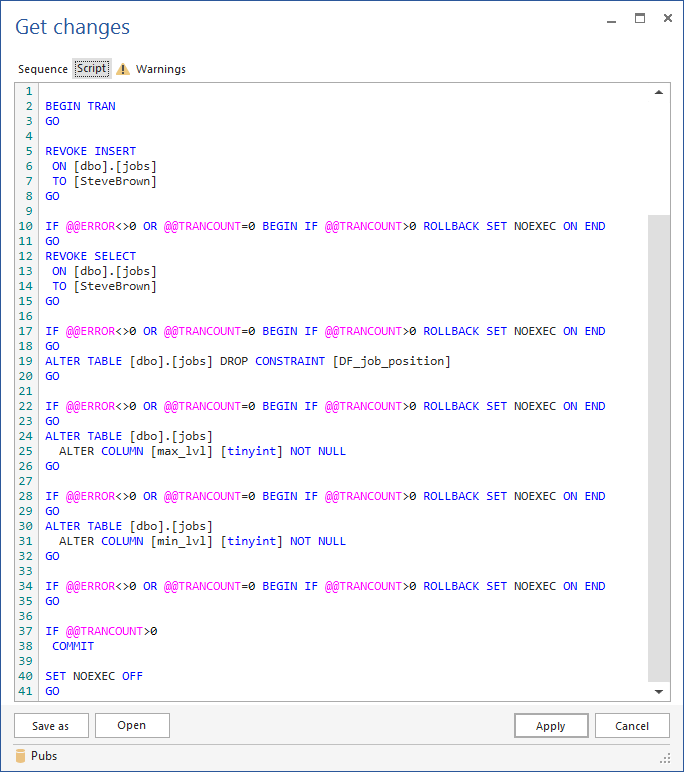 The script is wrapped in a transaction, and in case it cannot be executed for any reason, it will be automatically rolled back and nothing will be applied against a database.

The script can be reviewed at this point, opened for additional editing in a new query window, if needed (using the Open button), or saved for later usage (using the Save as button).

At this point, it is important to mention that the SQL script can be edited in order to apply just a change related to permissions and avoid altering columns and dropping a constraint as shown above. In order to apply only the part of the script related to permissions that are granted to the user, we will use the Open button, to open a script in a new query window, and comment (or remove) the part of the script that is related to changes we don’t want to apply: 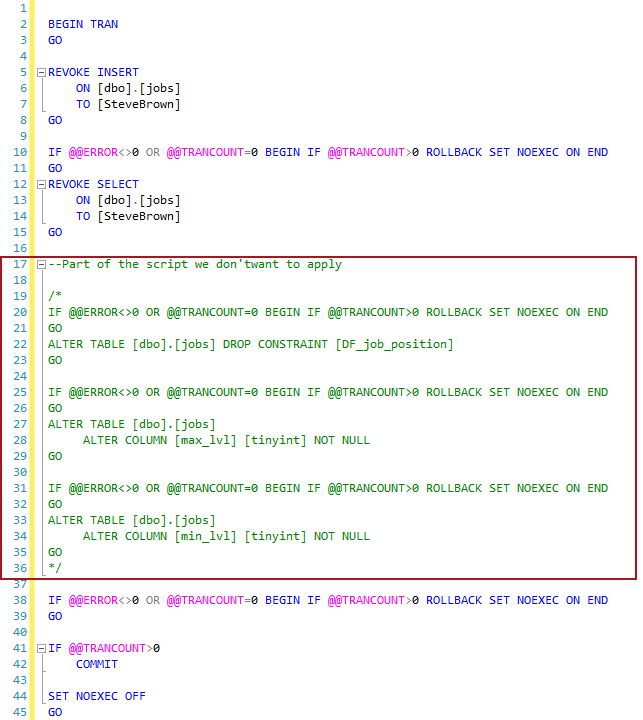 By executing the script, only specific changes will be reverted (changes related to permissions).

Since we applied only specific changes, the comparison between the version of the jobs table from the 3rd changeset and the current version in a database is as follows: 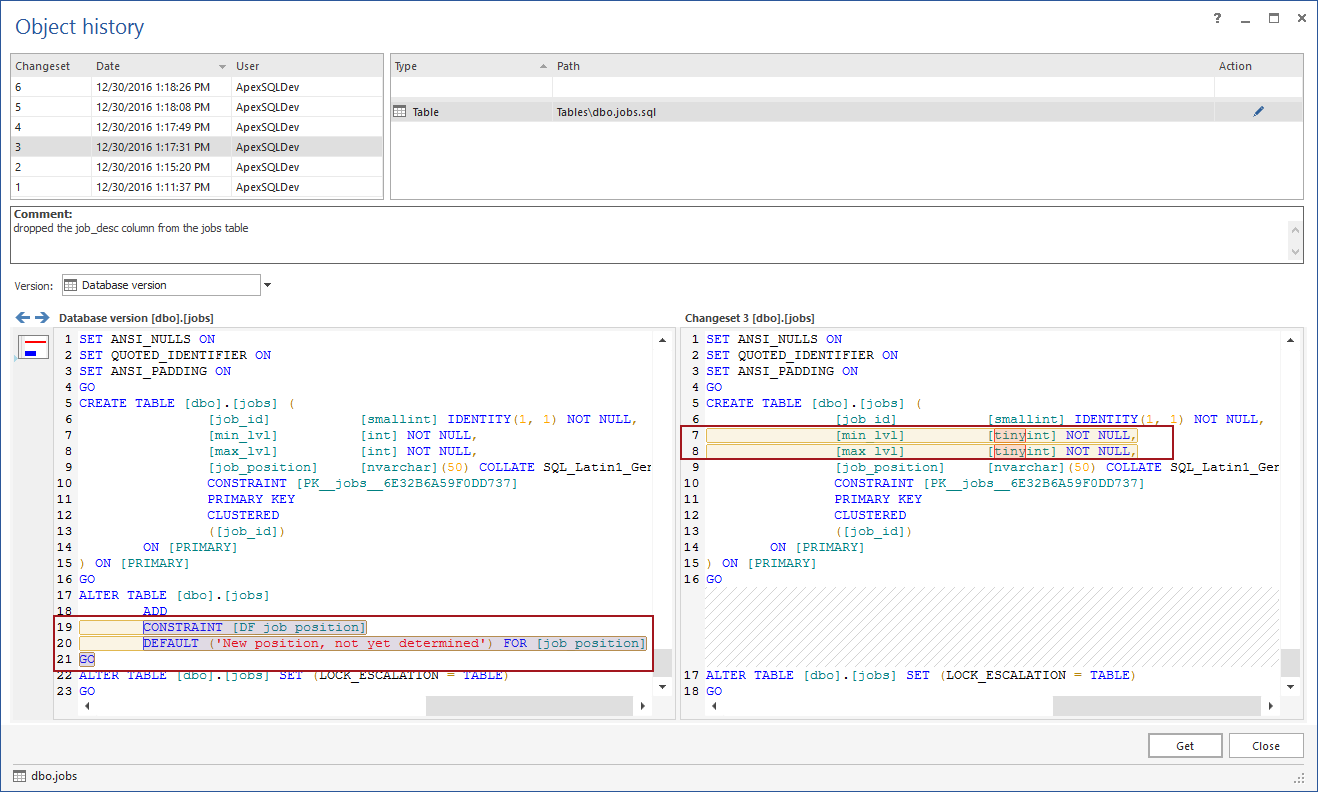 This is a confirmation that no other changes were applied expect the ones related to permissions.

Since we changed a database when applying changes from the repository, those will be shown in the Action center tab. Now, the part of the script related to permissions does not exist on the left side (database) but it exists on the right side which is the latest state on the repository: 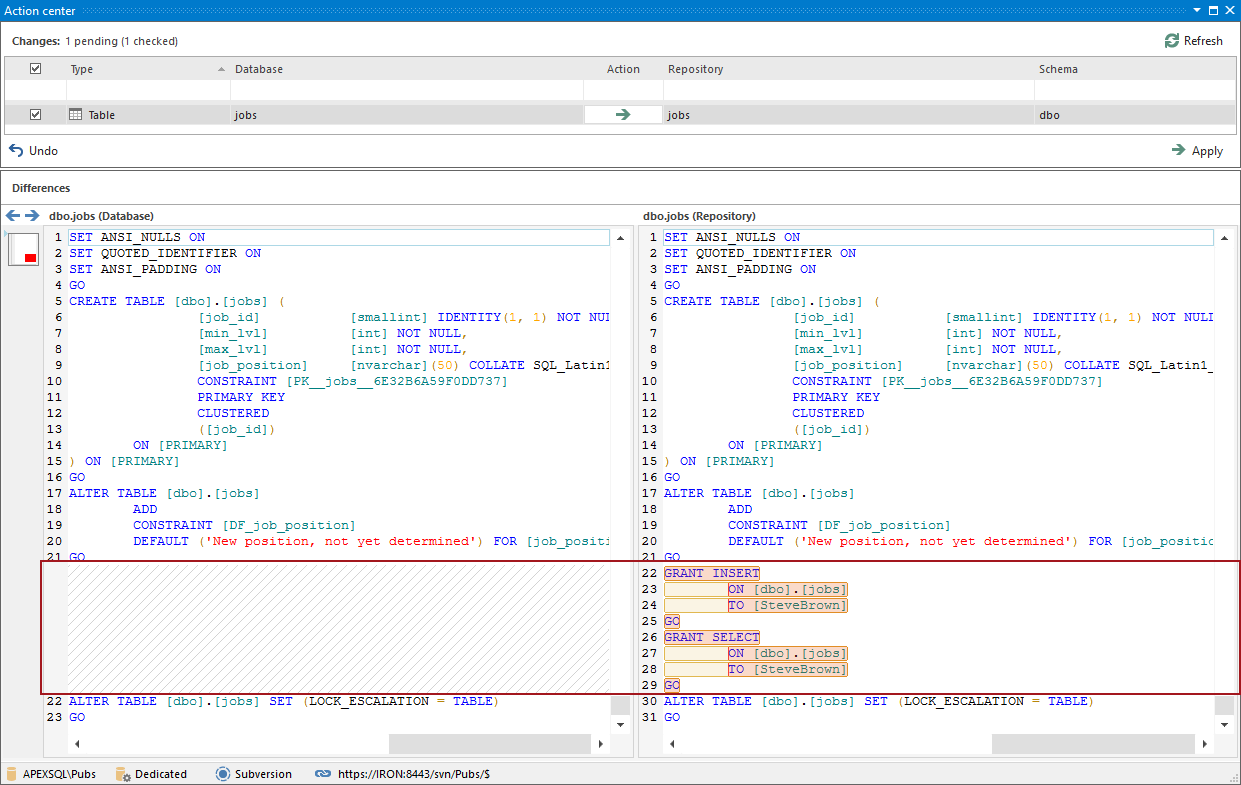 By committing this, we’ll have a version of the jobs table without the SELECT and INSERT permissions granted to the user, as the most recent (latest) version on the repository.

Using the described approach, the change history for any object can be reviewed, any version of an object can be compared to any other version of the same object from a different changeset and applied against a database.