This article will explain the differences between renaming database objects with SSMS and the ApexSQL Refactor’s Safe rename feature.

In the following example, let’s create the new database NewDB, and two tables Users and Address. The table Address will have Foreign references to the table Users:

And, at the end, create view v_Address01 and trigger trgAfterInsert:

To see dependencies for the table Users, select it in the Object Explorer and choose from the context menu View Dependencies command. 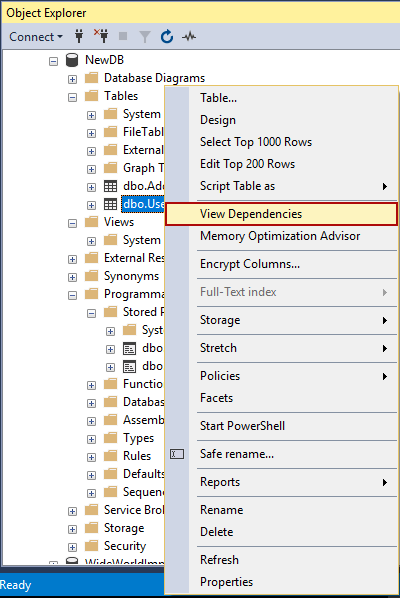 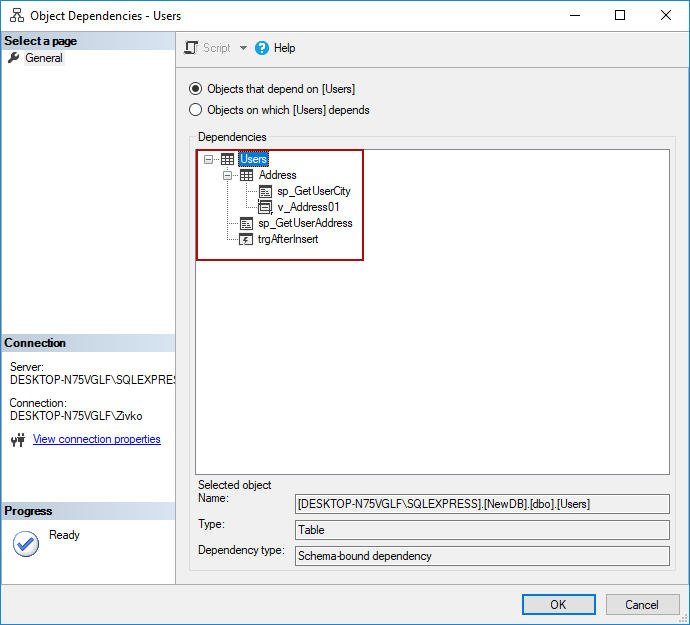 Database objects that have schema-bound dependencies to the table Users will automatically accept all changes made. After renaming the table Users, there won’t be any dependency related errors.

But, the name modification of the table Users, will make non-schema bound dependencies objects invalid. To use these database objects after the table Users is renamed, their code must be modified manually.

To see that in example, select the table Users in the Object Explorer window and from the context menu click the Rename command: 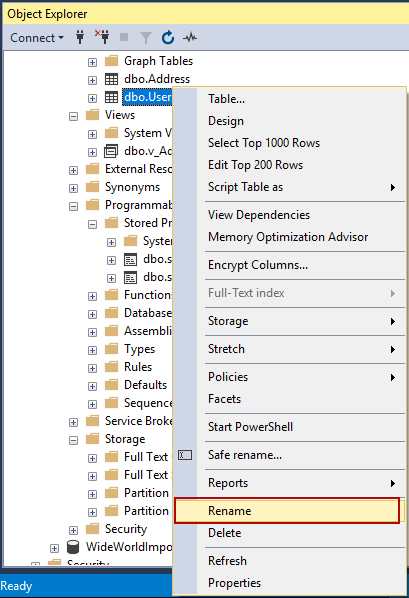 Enter new name for the table Users, for example NewUsers and refresh database NewDB. In the table list it will be renamed as NewUsers: 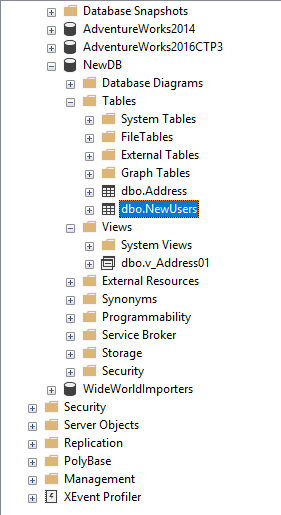 After the new name for the table is entered, and database is refreshed, the list of referenced objects will change. Check if dependencies are changed for the renamed table NewUsers. Once again, select table NewUsers and click the View Dependencies command: 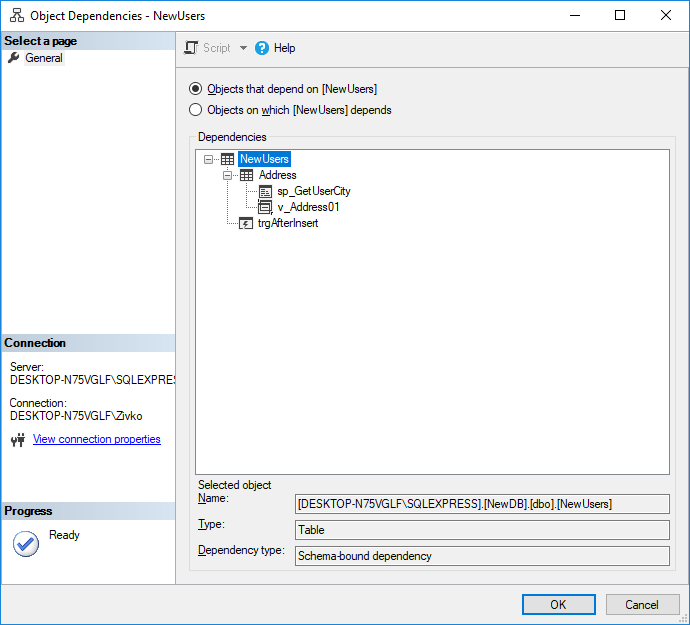 On the other hand, the stored procedure sp_GetUserCity and the view v_Address01 are still on the list, but when these are used, errors will be raised:

One of the ApexSQL Refactor’s SQL code refactoring features is Safe rename. This feature provides renaming SQL Server’s objects without breaking the database dependencies. Database objects which can be renamed with this ApexSQL Refactor feature are: tables, views, procedures, functions, table/view columns and procedures/function parameters.

To see how the Safe rename feature works, select the table Users in the Object Explorer and from the context menu click Safe rename command: 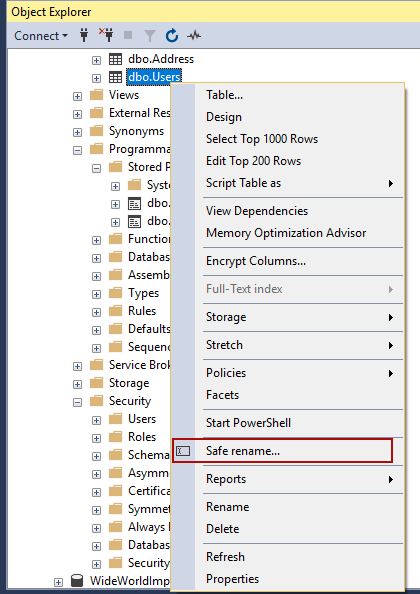 Or choose the same option from the ApexSQL Refactor main menu: 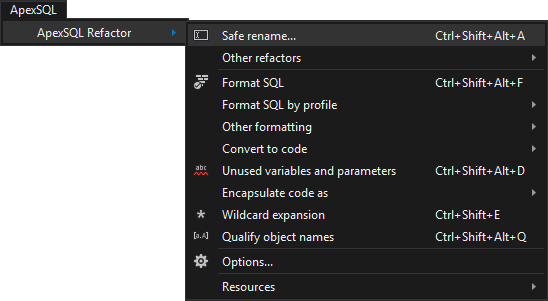 The Safe rename window will appear: 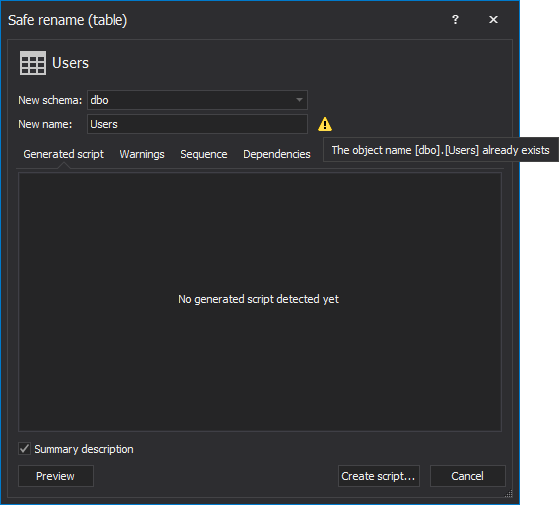 In the fields, New schema and New name are the schema and the name of the selected table.

In this window, table schema can be changed by choosing one of the existing database schemas from the drop-down list. When renaming a table with SSMS this is not one of the options. Because of that, for this example table schema will not be changed.

Insert new table name in the field New name. The important thing to know is that there are not any restrictions for characters in use. For this example, the new name for the table Users will be NewUsers.

Click the Preview button, located in the lower left corner of the Safe rename window.

Under the Generated script tab is T-SQL refactoring script which after execution will rename the table Users. In this window, the script cannot be changed, it can only be reviewed: 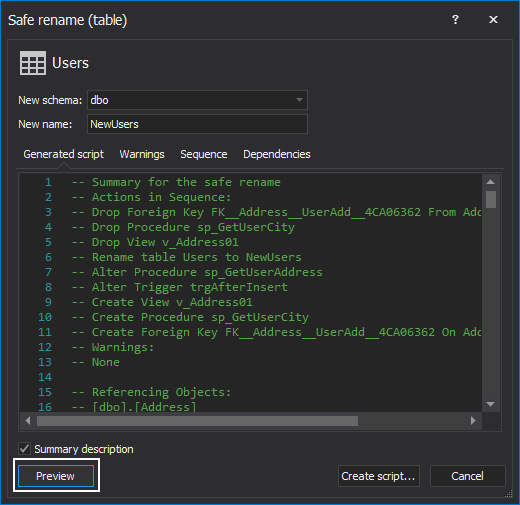 All warnings related to the renaming table, will be under the Warnings tab. For this example, there are no warnings: 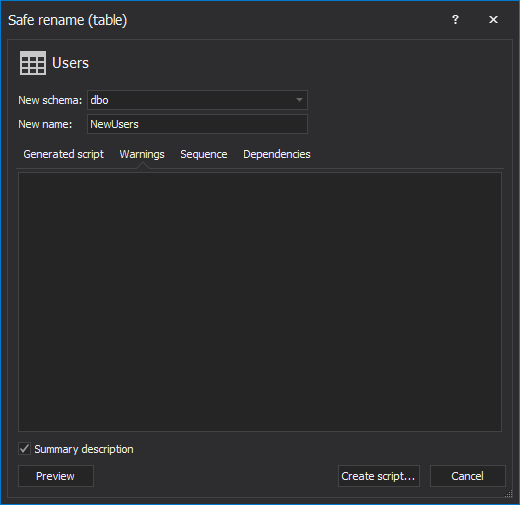 To check all actions which will be executed for renaming the table Users, click on the Sequence tab. All actions are ordered in that way, so their executions will prevent breaking dependencies between the objects: 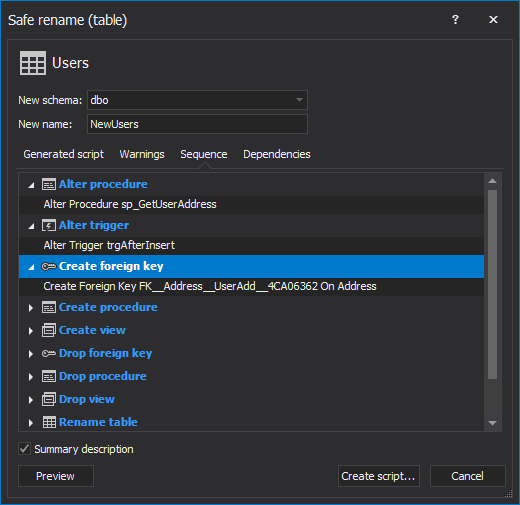 For renaming the table Users simply click the Create script button. The generated script will be opened in the SSMS Query editor window: 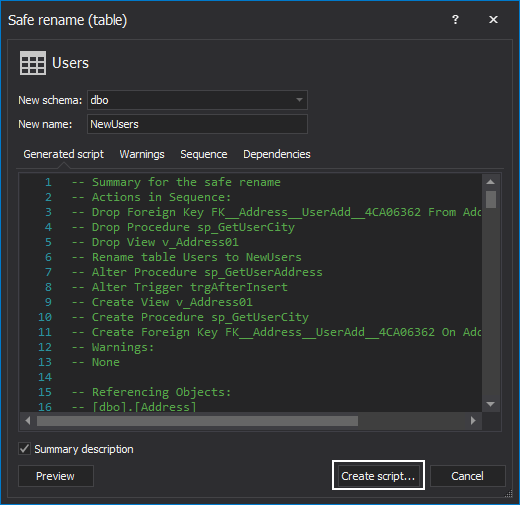 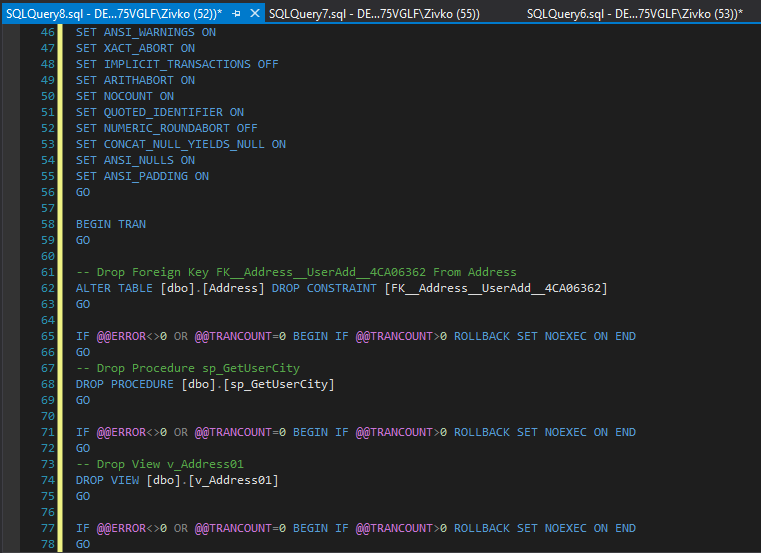 In the Query editor, the script can be modified or it can be executed as is. After execution, the following message will appear:

Caution: Changing any part of an object name could break scripts and stored procedures.

After refreshing database NewDB in the table list, instead of the table Users will be the table NewUsers, same like after renaming table with SSMS, but with one big difference – none of the referenced objects are not invalid.

Just for check, if dependencies for the renamed table NewUsers are checked with the SSMS View dependencies feature, this list will appear: 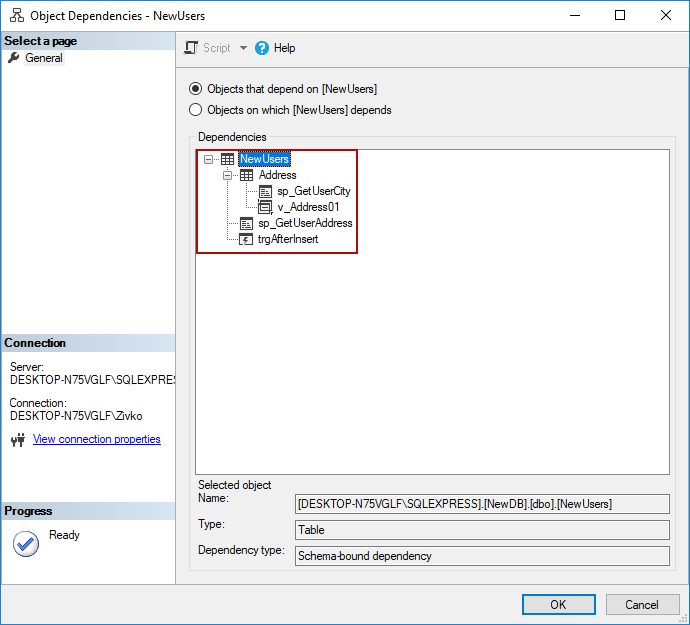 This list is exactly the same as the first one, before changing the name of the table with ApexSQL Refactor.

With ApexSQL Refactor’s Safe rename feature it is easier to rename the table and what is more, without any additional work for changing all referenced objects. Also, in one window all things regarding renaming can be checked (warnings, sequences, dependencies).

This example showed how to rename a table, but the same steps are for renaming any of the SQL Server database objects (table/view columns, function/procedures parameters, views, functions, procedures).