A regular expression (abbreviated regex or regexp and sometimes called a rational expression) is a sequence of characters that forms a search pattern, mainly for use in pattern-matching and "search-and-replace" functions. They can be also used as a data generator, following the concept of reversed regular expressions, and provide randomized test data for use in test databases.

One of the most used information is a phone number, and that is a good example of data that can be used to populate a database with. For our example we will use US based phone numbers, and show how they can be generated using the regular expression.

To explain this, first the syntax of US base phone numbers must be understood. They are defined by the North American Numbering Plan (NANP). The NANP is a system of numbering plan areas (NPA) using telephone numbers consisting of a three-digit area code, a three-digit central office code, and a four-digit station number. The example of the US phone number syntax is below:

Since the first digit of a three-digit area code can be only in range 2-9, the following syntax element is used [2-9] that will generate a random number from a range 2-9.

To visually divide the groups of digits in a phone number, the dash symbol is used (–) that has no syntax value, just visual.

Again, the dash symbol is used to visually divide groups of digits.

The complete regular expression to generate realistic US phone number looks like this:

This regular expression is used in the following options available for the random data generation.

Using this code would produce the following random data:

Another option is to leverage Visual Studio 2010 and its feature to generate random test data using a Data Generation Plan. A Data Generation Plan allows to select how the test data will be generated for specific tables and columns. It has several built in data generators which generate random data according to the column data type. Properties of these generators can be changed, to define the range and format of the generated test data.

One of those generators that we are interested in is the Regular Expression generator, and it can be used in the following way:

Start the Visual Studio 2010 and load your database project. Right click on the project node in the Solution Explorer, and go to the Add menu and click on the New item: 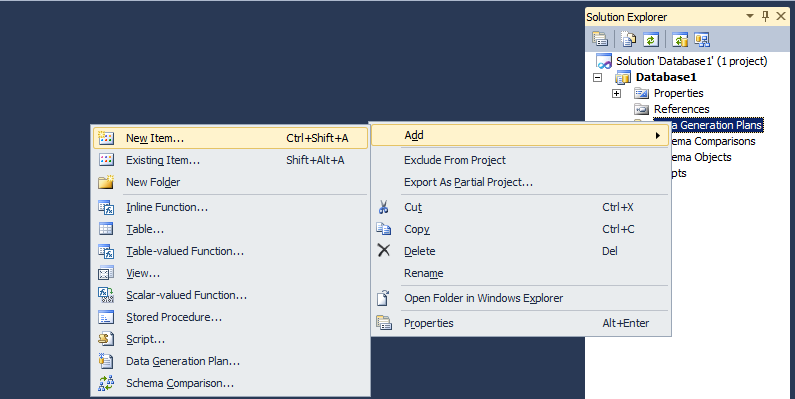 The schema objects of the database project are scanned and all the tables that exist are listed by Data Generation Plan. All the tables are included in the plan for data generation by default. Select the tables for which the data is generated, and enter the number of rows that will be generated for the tables selected: 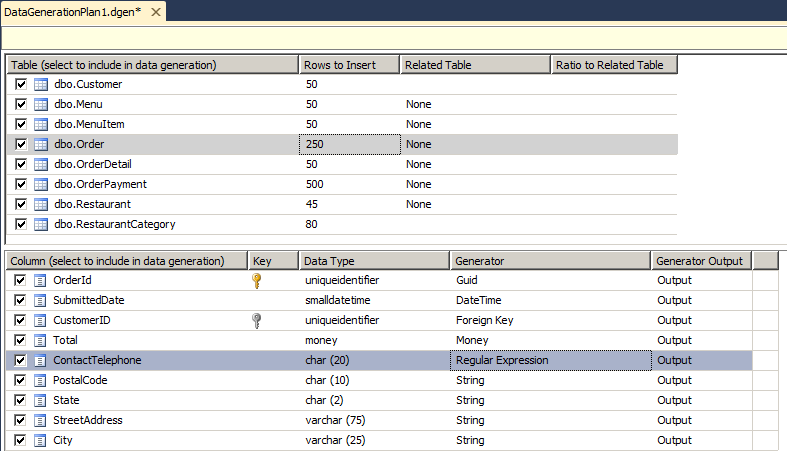 Next, select the Colum for which the Regular Expression (RegEx) generator will be used and in the Generator drop down menu select the Regular Expression generator. After the generator is set, the regular expression which will be used to generate random data should be entered. That is done in the properties window of the selected column, which is accessed by right clicking on the column and selecting the Properties item, or by pressing the F4 key. In the expression box enter the desired regular expression (in the example below the regular expression, explained in the beginning of the article, [2-9][0-9]{2}-[2-9][0-9]{2}-[0-9]{4} will generate random US telephone numbers):

If the preview looks good, the next step is to generate actual data. This is done by clicking the Generate Data button in the toolbar or pressing the F5 key. This will bring the Connect to Database wizard, where the details of the database are specified:

To execute the data generation plan and generate data for selected tables, database connection needs to be specified, and then click on the OK button.

ApexSQL Generate is a SQL data generator tool, which has the ability to quickly generate data, using various sources, with a variety of data generators.

One of its features is to generate randomized data using the regular expressions.

The goal is to enter a regular expression, which will be used to populate columns with a test data. This can be done in the following way:

The Unique option ensures unique values will be generated. 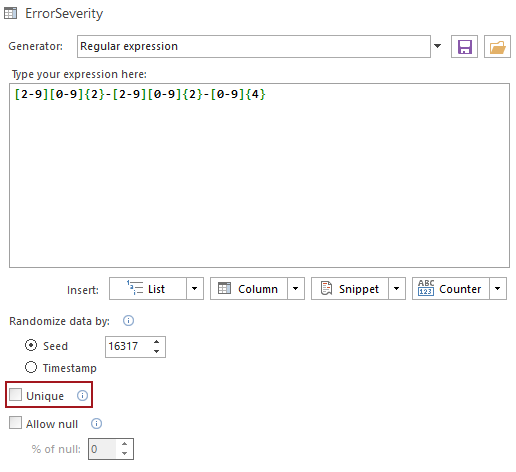 The important thing to note is that the generated set of values is defined by the Seed value. For every Seed value, there is exactly one set of possible generated data. For example, when the regular expression from the beginning of the article is used, and the Seed value is 0, the first few rows of generated data would be:

If the Seed value would be e.g. 53, the resulting set would be:

The generated set can be repeated by using the same regular expression and the same Seed value. This can be used when two or more columns have to be populated with the same data and in the exact same order. 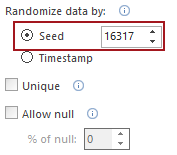 More information on the Seed value can be found in the KB article “Seed feature in ApexSQL Generate”.

After all the options are set, the data generation process can be executed by the Generate button in the main window.