Imagine a scenario where there is a need to get a database into source control quickly and easily, including all schema objects and data from certain code tables that won’t change aka Static data. Then, once a database is ported successfully to source control, to be able to update the repository nightly with any and all changed objects. In this way, a database will be fully and automatically source-controlled, without having to worry about direct integration, check-ins, check-outs, etc., essentially providing much of the “gain” of database source control integration, with little of the “pain”. This article will describe how to build this “poor man’s” SQL database source control integration system using a 3rd party tool, ApexSQL Script.

ApexSQL Script provides the ability to script SQL Server table data and structure, or just a few of the desired objects from it, to any of the given source control systems.

Note: To implement a system that removes deleted objects as well, we suggest using ApexSQL Diff.

Regardless of the lack of support for deleted objects, ApexSQL Script can still be used to complete this use case, and this article will help illustrate some of the functionality of the tool, both in GUI and CLI.

In this example, a database will be scripted to source control including:

The source control system that will be used is Git, particularly, the Git repository hosted on Bitbucket.

Then, automation of the scripting process to source control will be shown, so that this job can run unattended, on a schedule to periodically update the schema objects and add any new ones, but leave the static data unchanged.

Setting up the CLI task

To automate this to run unattended on a schedule, a .BAT file will be created. The goal of this automation is to update existing object schemas, which may have changed, and also add any new objects.

Note: Objects that may have been deleted will have to be removed from the source control repository manually

When automating though, a few important changes need to be made:

First, to simply re-run this project via the CLI, the following script cn=an be used:

By running the following command, the result is as follows:

In case everything finished without errors, the Files checked in to Git message will be shown in the last line of verbose along with the label name (including the timestamp) specified in the CLI command.

Scripting results can be checked directly in the repository: 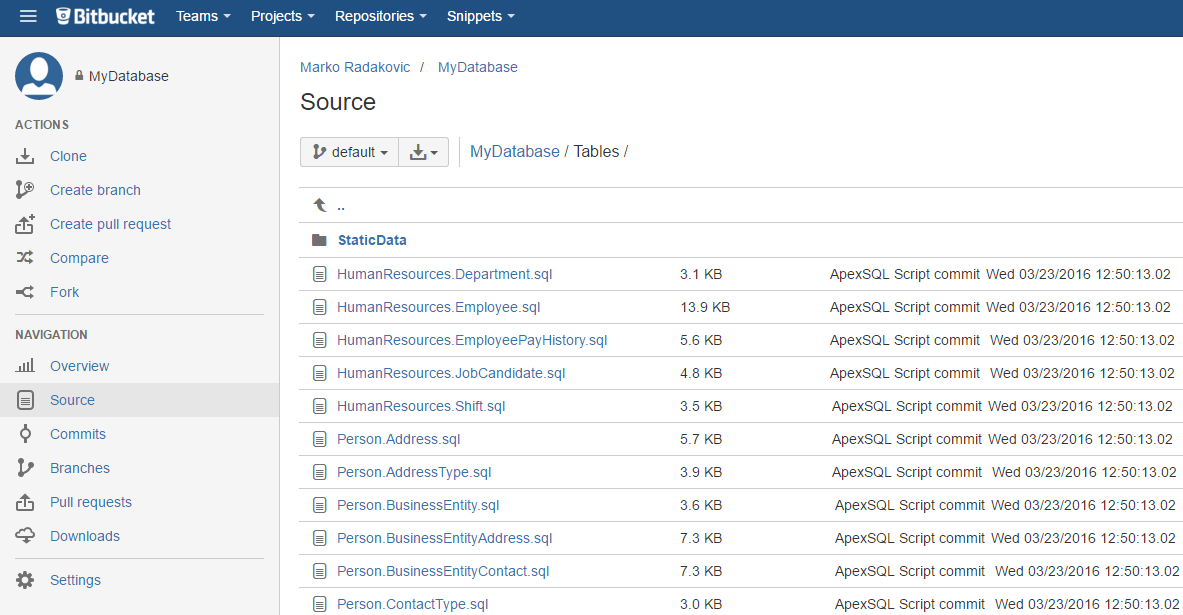 Note that any SQL Server table data scripted in this process will be committed as Static data. Also, comments include date and timestamp as specified in the CLI command. Label will be available on the repository: 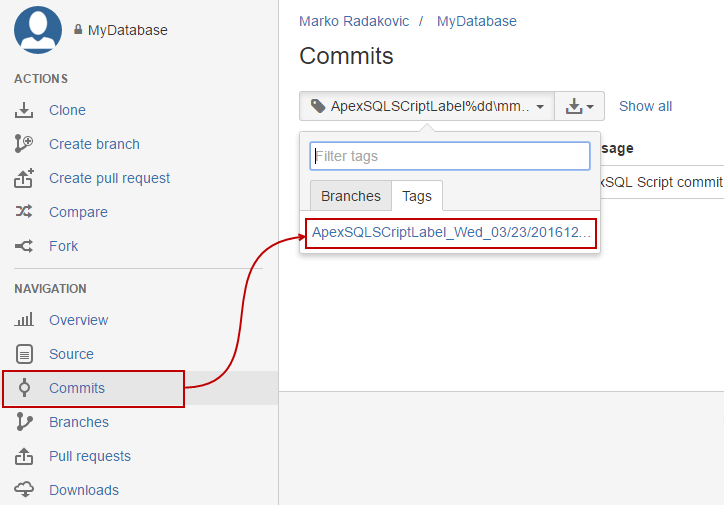 To run this script to pick up only changed objects, including any new ones that have been added but avoid re-scripting static data, use this example:

Note that the dynamic date stamped comment (/sccmt:”Committed using ApexSQL Script %DATE% %TIME%”) and label (/sclbl:”ApexSQLSCriptLabel_%DATE: =_%%TIME::=_%”) are supplied and that these variables are outputted as a part of the result.

Also note that the /nfsh (aka /no_format_scr_header) will need to be used to suppress the header, which will cause all objects to be scripted, regardless of whether they were changed or not. This issue will be resolved in the next version.

Also, check out the article on how to create the automation script, without the need to create manually.

To later re-create the schema objects and static data from source control, back into an existing database, it is recommend to use ApexSQL Build.

Q: Will a new version of the object be created in source control each time, even if it didn’t change, or will the source control system be smart enough to detect only changed objects?

A: No, a new version of an object will not be created if there are no changes. This is done with adding the /nfsh switch.

Q: What happens if I re-run the project with the same label? Will it cause an error from the underlying source control system?

A: The task will not finish successfully and the following error appears in verbose: