Collaborating on database development introduces a series of challenges. For instance, having the development team change the tables, views, stored procedures and other objects in a single, shared database, although intuitive, can introduce severe issues down the road as valid changes can be lost or overwritten by an unsuspecting teammate. This issue might be mitigated by restoring a database backup – under the assumption a valid backup exists. Even if it does, overwriting the development database with a backup means losing all of the valid database changes that have occurred since the backup was taken; not to mention the fact that restoring a large backup can take time – during which none of the developers can work on the database being restored.

Last but not least, a key prerequisite for successful database development is to have the ability to recreate the database at any point in time. This is particularly important if the database is shipped to clients – if a bug is found in a specific database build the ability to quickly revert to the exact same conditions that caused the issue is paramount in resolving it as quickly as possible.

The best way to address all of these challenges is introducing database version control. However, simply requiring the development teams to use a SQL database source control management system isn’t the magic bullet which will prevent issues like the ones mentioned above from happening. On its own, database source control introduces additional overhead as the developers are required to save the changes they’ve made to an object in a separate SQL script, open the source control system client, check in the SQL script file using the client and then apply the changes to the live database. If this order is ignored, for instance if the database is updated and the versioned SQL script hasn’t been checked in, changes might be overwritten. Furthermore, having the object’s script checked out in the SQL version control system, won’t prevent anyone from modifying the live object, causing discrepancies between the database and the code which can be hard to detect and even harder to troubleshoot down the line.

This is where ApexSQL Source Control can help.

ApexSQL Source Control is a SQL versioning add-in, which allows you to version control SQL databases and objects directly from within SQL Server Management Studio. It integrates with all major source control systems and provides you with all object versioning features, without the need for an additional source control client. For more information visit the ApexSQL Source Control product page. 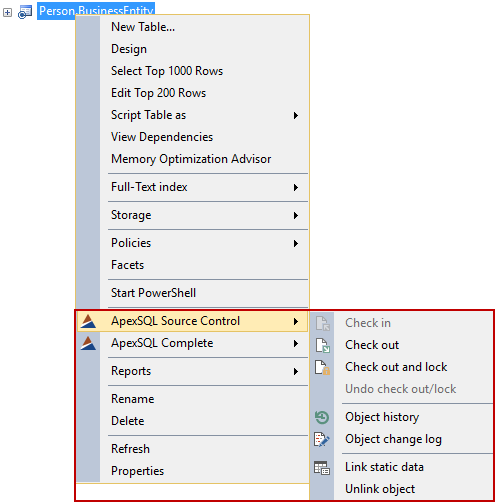