Having a SQL database being version controlled locally, by storing all changes in a repository on a local machine can be quite handy. In the context of team based database development, it is necessary to establish the environment where changes can be tested locally, specific revisions reverted from the commit history, and doing such things before pushing changes to the remote repository where the rest of the team will be able to review them, and apply against a local database copy.

Distributed source control systems such as Git or Mercurial provide a possibility to work with the local repository and when changes are tested locally, they can be pushed to the remote repository. Also, the advantage of this approach is that it does not require the remote repository to be constantly available, and allows developers to work “offline”, independently, on their own sandboxes, before pushing changes to the central repository.

In this article, synchronizing local changes with a remote repository will be covered through GitBash (a free client for Git source control system), Tortoise Hg (a free client tool for Mercurial source control system), and ApexSQL Source Control, the add-in that integrates directly into SQL Server Management Studio (SSMS) and allows seamless version control without using any other client tool.

As a starting point, all database objects are scripted from within SSMS and saved to a local folder that will be used as a local repository. For detailed instructions about how to generate scripts for all (or a group of) database objects, refer to this article. For the purpose of this article, each SQL database object is scripted in a separate file. Exploring the GitLocal folder created to be a local git repository, the following result is shown: 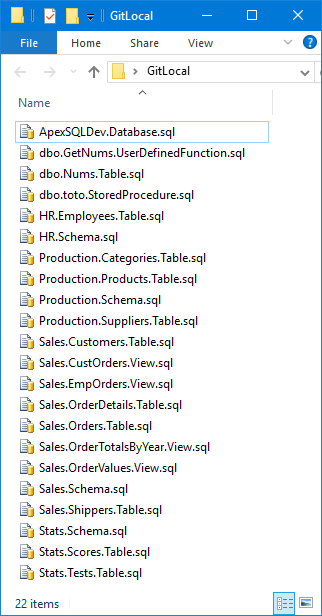 To make this folder a Git repository, start GitBash command line client, and set the GitLocal folder to be the current folder. This can be done by right-clicking the folder, and choosing the Git Bash here option:

This initiates the Git Bash command line where the first command is to initialize the current folder as a Git repository. To do so, type the following command:

After the repository is initialized, type the following command to check the status of SQL files saved in the GitLocal folder:

The result is as follows:

On branch master
Initial commit
Untracked files:
(use “git add <file>…” to include in what will be committed)

The current status of these files is that Git recognizes them, but no files are included to be version controlled. The next step is to “add” them or to “prepare” them to be committed. The following command is used:

Basically, the add command will include all files specified after the command. Since the goal in this case is to add all SQL scripts, the ”.” is used. Checking the status gives the following result:

On branch master
Initial commit
Changes to be committed:
(use “git rm –cached <file>…” to unstage)

All files are recognized as new, and now they are ready to be initially committed to the local repository. This will be done using the following command:

In the similar way as all files are added/prepared to be committed, using the –-all argument for the commit command, all previously added files will be committed. To provide the commit message, the -m argument is used followed by the commit message. After the commit is finished, there will be no results, next time the status is checked, since this means that all objects are added to be committed, and initially committed to the local repository. Exploring the actual repository, each object will have the appropriate icon showing that the object is being version controlled, and it is synchronized with the local repository: 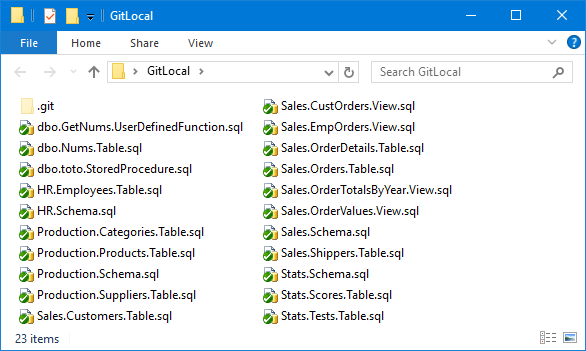 Making any change in any of these files results in changing the icon and the result when checking the status through the command line. For example, a new column is added to the Production.Products.sql table, and a script is saved in the GitLocal folder, by overwriting the previously saved file. The result is as follows: 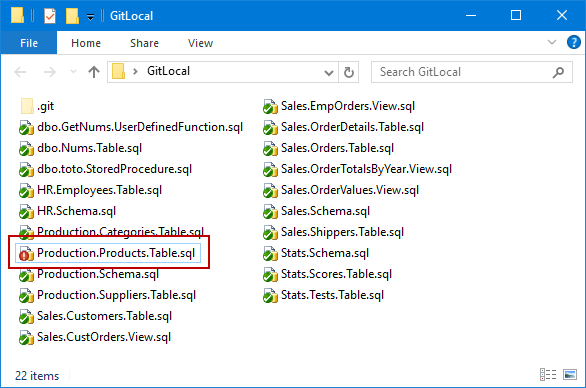 In addition to this, executing the git status command gives the following:

On branch master
Changes not staged for commit:
(use “git add
modified: Production.Products.Table.sql
no changes added to commit (use “git add” and/or “git commit -a”)

The following command is used to add and commit this change in one line:

Executing the above command will revert the icon for the changed file as it was before, and checking the status of the repository will show no results, again.

Pushing to the remote repository

As soon as a database object change is verified locally (tested on a local copy of a database), it can be pushed to a remote repository, so the rest of the team can see the change and apply it against a working copy of a database.

When the remote repository is added, changes committed locally can be pushed with the following command:

Executing this command invokes the dialog for providing credentials to access the remote repository: 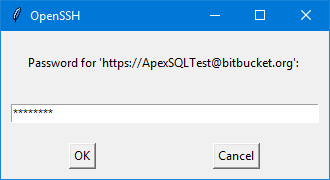 Once the changes are pushed, the rest of the team can pull each of them to apply locally. By inspecting the remote repository, a list of commits will be shown:

In addition to this, the previously created remote repository can be cloned to a local folder where changes can be committed, and later pushed in the same way. This approach will be explained below using another source control system.

After scripting the same database objects to the MercurialLocal folder, the result shown in the Commit tab (marked with the green checkmark in the toolbar) is as follows: 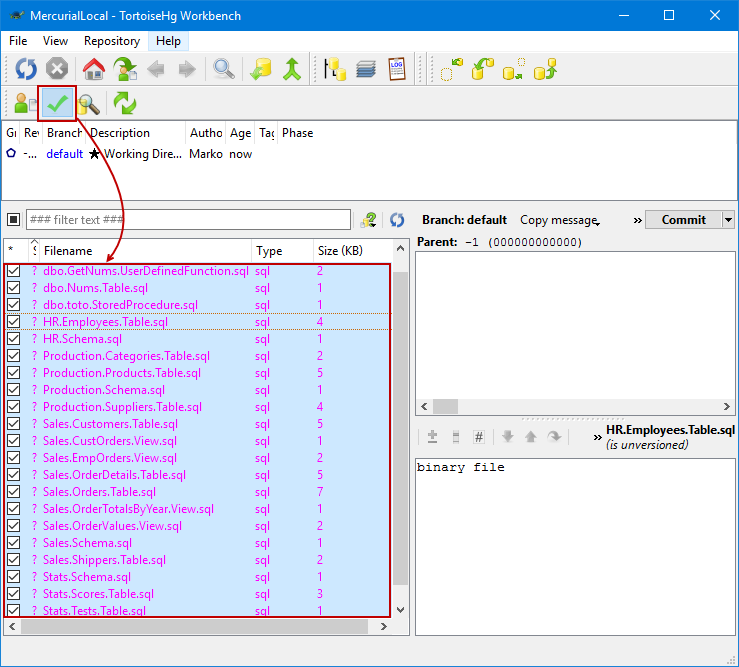 All scripted files appear in the lower left section, with the question mark in front of each file. This means that Mercurial recognized that such files exist in the cloned repository, but no files are added, or even committed. Similar to previously explained workflow using Git, these files will be added first (prepared to be committed). To perform this, right click the list of files (all files are highlighted and checked), and from the context menu, select the Add option: 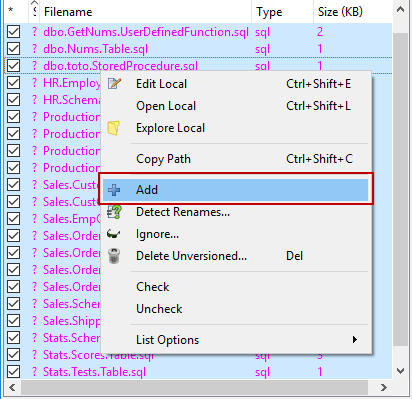 Once the files are added, they’ll change the color to green, and at this point they can be committed. On the lower right section, a commit message field is available, along with the Commit command: 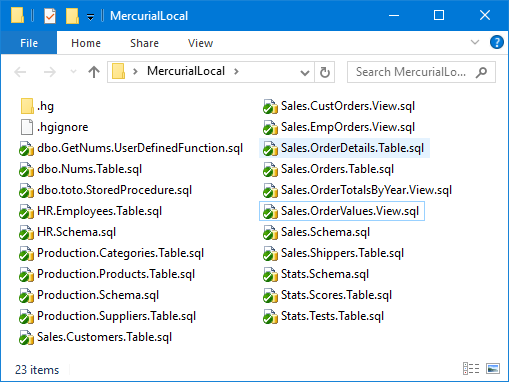 Any additional database SQL object change appears in the lower left section of the TortoiseHg main form as soon as it is refreshed, and can be added/committed with the appropriate commit message. For the purpose of this article, the same changes are made as when presenting the Git workflow. It is important to note that committing changes like this will not push them to the remote repository.

Pushing to the remote repository

Once the changes are good enough to be pushed to the remote repository, the Push command from the toolbar is used. It initiates the confirmation dialog:

Inspecting the remote repository after the push operation is done gives the following result:

All changes committed locally are pushed to the remote repository where the rest of the team can access to review/apply those changes.

In both cases, using Git and Mercurial clients, it is necessary to switch between SSMS and the client after making any change, in order to commit/push it. People can get used to it, but it would be good to have a solution that can be used to accomplish all of these from within SQL Server Management Studio, and to avoid initializing, cloning and adding remote repository.

ApexSQL Source Control automatically creates the local repository upon linking a database. In case the user wants to specify other location, this should be set before linking a database. This can be done from the Options form, by changing the path of the working copy, under the General tab:

To accomplish the same workflow of committing changes locally and push them to a remote repository, using ApexSQL Source Control, follow the steps below:

As shown above, all changes committed locally are pushed to the remote repository. The user can switch back to the offline mode, or continue working online, and having changes pushed directly. All changes will be available offline as well.