In this article we will explain how to create a simple batch file to automatically synchronize database schema changes with a source control repository from any individual object changes detected in the database.

Even so, it wouldn’t be regarded as a “poor man’s” either as this solution does ensure that a database is fully versioned on an individual object level, vs simply backing up the database or scripting the entire schema to source control.

Also, it provides for updating an object’s change history only if there were changes, vs simply updating the repository with every object schema, regardless of whether it has been changed or not. By logging only changes, the history of revisions to isolate specific changes becomes a very straightforward task. If there is a version for every update cycle, isolating a specific change among hundreds or thousands of versions is essentially impossible without additional, specific information about the context of the change e.g. day or week of the change.

And finally, it will require the use of a 3rd party tool, ApexSQL Diff, in addition to the source control system used (in this example Git, which is free was used).

This system will automatically compare and synchronize database schema changes with a source control repository, unattended and on a schedule e.g. nightly. The repository itself and any specific objects will be updated, only when changes were detected.

Setting up the task

Before we consider automating anything, we want to prepare and configure a comparison and synchronization job manually. Once everything is set, we can utilize the save project file to re-run the job manually, or easily automate it.

For more information on how to configure ApexSQL Diff to work with source control, please check this article.

Once the project is set, save it, using the Save or the Save as button in the lower left corner of the Project form. We’ll save this project as update_MyDatabase.axds:

Once the project is saved, you can run it manually at any time using ApexSQL Diff GUI. To do so, start ApexSQL Diff, and open the previously saved project using the Open button to initiate the Project management form: 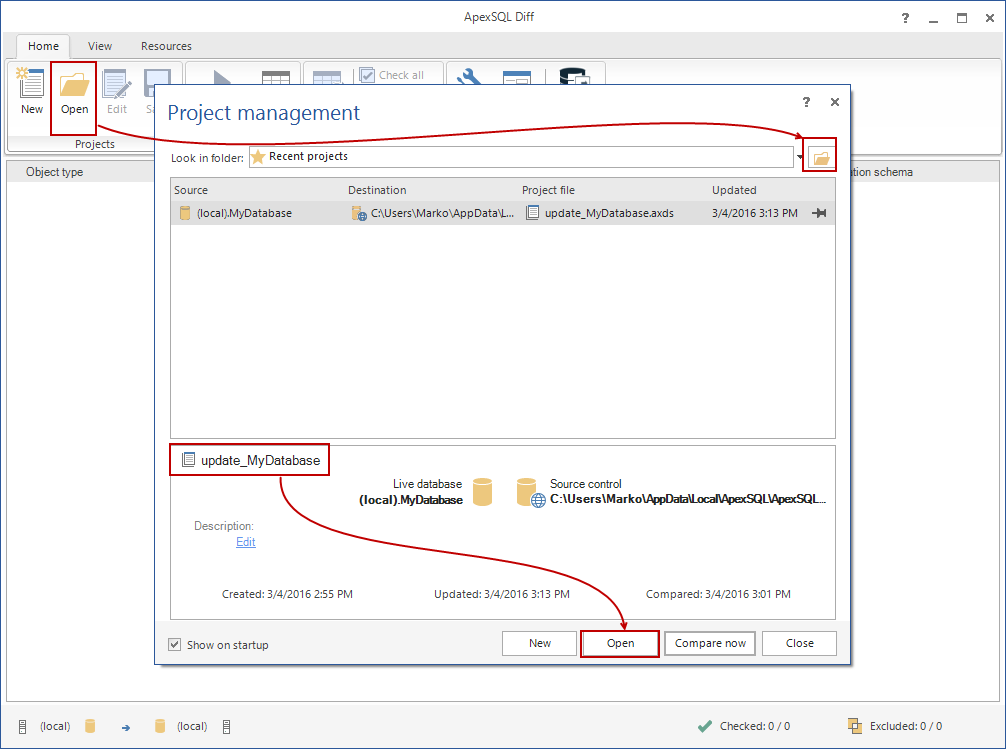 When the project is opened, the Project form appears with all the prepared settings for the source and destination. We’ll compare these sources, by clicking the Compare button, to check if anything is changed in the database: 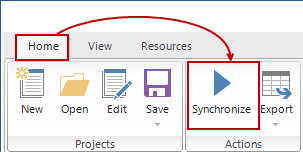 If we choose to create a synchronization script, it will be created as follows: 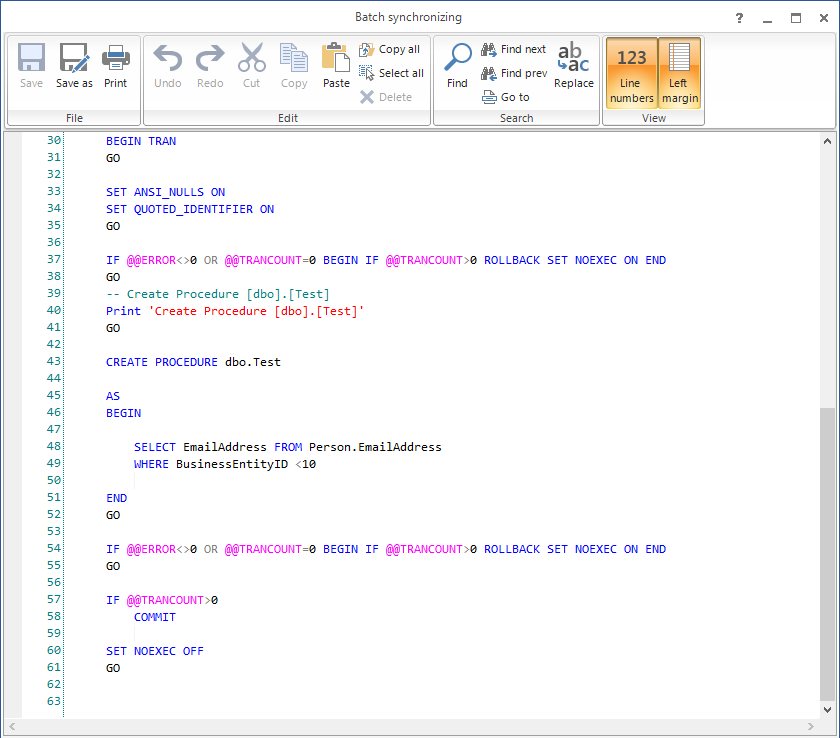 However, we want this script to be committed to source control, so in the Output options step of the Synchronization wizard, we’ll choose the Update files in source control option:

After the confirmation message, all changes (in this case newly created stored procedure) will be committed to source control. We can check the repository, to make sure the selected procedure is properly committed: 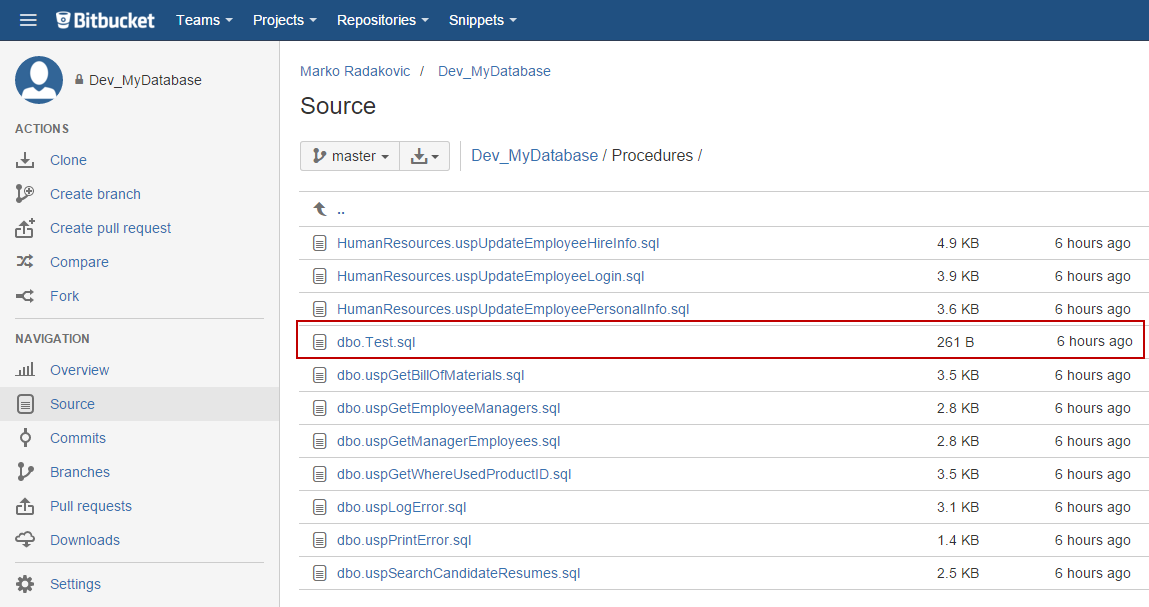 By going one step deeper, we will see the actual sql script of the procedure: 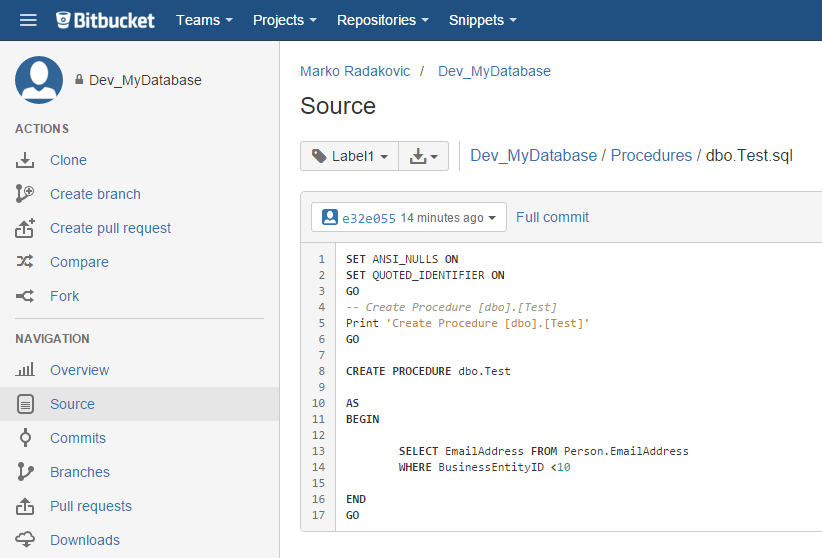 Please note that the /sync switch is mandatory in order to commit changes from the database.

Executing this in the command prompt gives the following result:

No output format was specified, so T-SQL is being assumed
No output encoding was specified, so Unicode is assumed
Loading Project…
Connecting to (local).MyDatabase…
Connection successful
Reading the script folder: ‘C:\Users\Marko\AppData\Local\…\SourceControl’
Retrieving metadata for $ – Reloading principals…
Retrieving metadata for $ – Reloading data spaces…
……
……
Starting…
Updating the file C: dbo.Test.sql
The synchronization was completed successfully

Additionally, you can execute the following command:

It will throw the appropriate error level code, based on the status of the executed command. If the above command is added to a batch file, the result will be the same, with one additional row:

The last line shows the “0” exit code which confirms the success of the command execution.

Let’s try to mess things up a bit, in order to force a failure. For instance, we’ve added the switch that should create a label on the repository called Label1, but the problem is that Label1 already exists on the repository, and another one with the same name cannot be added. The command is as follows:

The result of this command is:

The synchronization has failed
ApexSQL Diff exit code is 3

In the last few lines an error message is shown which explains the actual error, another message that the synchronization process failed, and exit code 3 which means that one of the switches specified contains invalid argument. In this case it is the argument Label1 for the /scsl switch.

To automate this process simply save your CLI code as a .bat file and schedule it to run unattended. For instance, let’s modify previously created dbo.Test procedure:

The batch file created from the CLI command is as follows:

After executing the batch file, the result is shows in the out.txt file placed on local C drive:

As shown in the portion of the verbose above, the exact file dbo.Test.sql is updated to source control, the synchronization was successfully, which is confirmed with the exit code value – “0”.

Looking at the repository, we can see that the procedure has been recently updated: 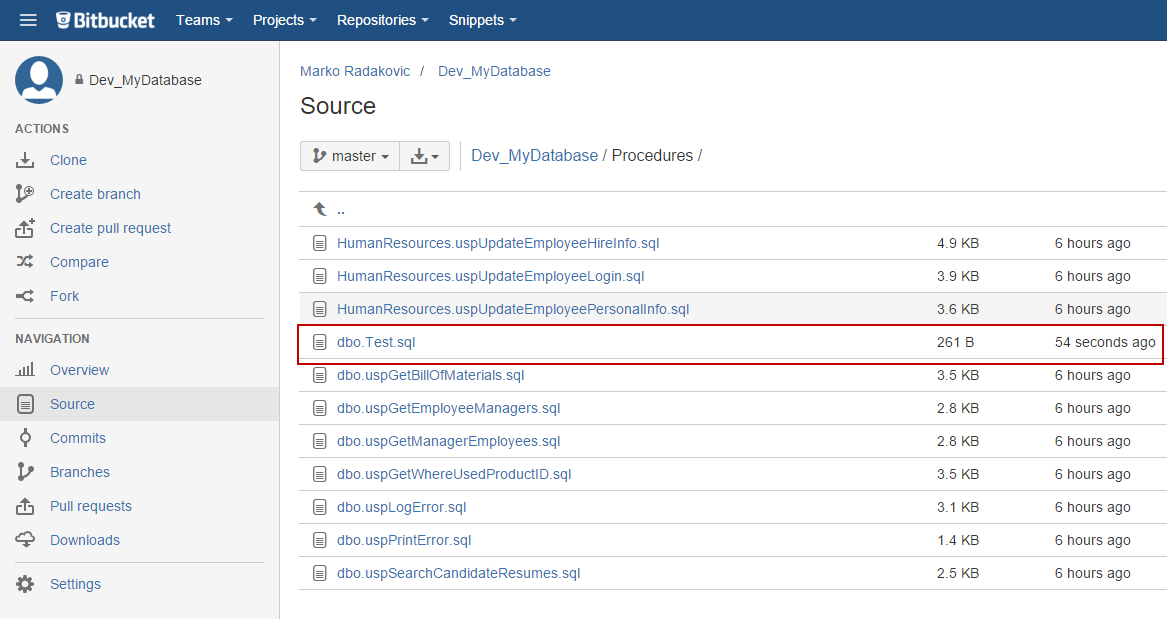 Investigating the particular script, we found that the WHERE clause is updated and contains the newly specified value: 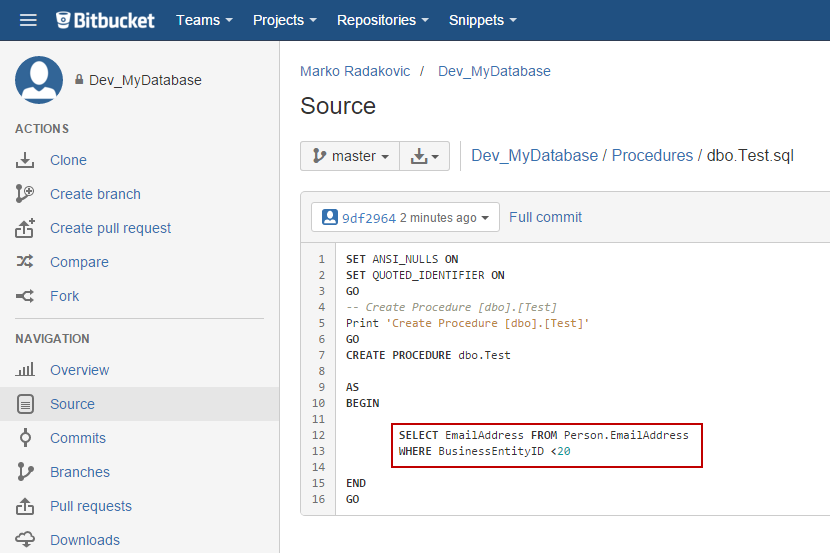 After the batch file is executed, the user can check the repository at any time for any changes. In case there are no differences between the repository and a database, nothing will be committed.

In case a new object is created in the database, it will be scripted and added to the repository. In the similar way, if an object is dropped from a database, during the synchronization process, the latest version of an object will be removed. However, all previous versions will be available from source control history.