In order to perform any continuous integration or delivery process, an important requirement – to be able to pull out the database (which was previously versioned in source control), automatically and repeatedly, to recreate the database in a QA environment at a click a button (or scheduled on a commit).

The important thing is to pull out the database in the correct order of parts in which it exists in source control:

Regarding this order, the first thing that needs to be done is to pull out the database creation script and execute it against a SQL Server, creating a database.

ApexSQL Build is a 3rd party tool, designed for building SQL databases from various inputs. It is well suited for the Build step for any SQL Server database continuous integration process.

ApexSQL Build has options to:

First, the job will be designed manually, via the GUI of ApexSQL Build. It can be done by following these steps:

Automating this process to run on a schedule, unattended, can be performed to make this process repeatable. This can be accomplished with a small PowerShell script.

This type of scheduled project should include the following:

The PowerShell script will include the following elements: 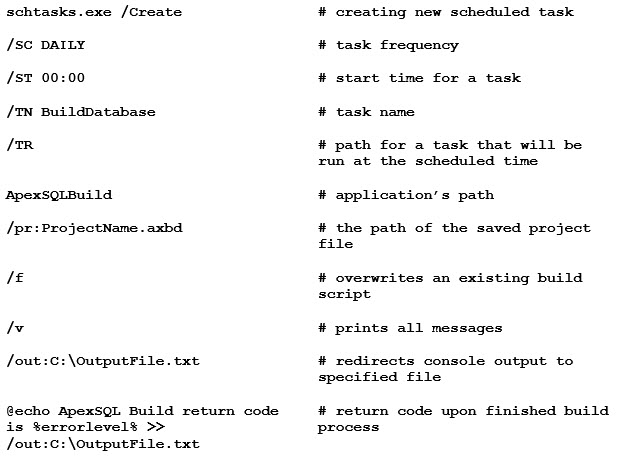 Note that PowerShell project can call and execute the application’s CLI code only if it is under the single quotation marks, and if the code is written in single line.

For more information about using the ApexSQL Build via the CLI check out the article about ApexSQL Build Command Line Interface (CLI) switches.

The project file previously created in the ApexSQL Build contains all needed information including the passwords, which will be saved and encrypted in it. Learn more about using the project file in the CLI.

In this example Windows authentication was used, but you can learn more from the article about Four ways of handling database/login credentials during automated execution via the CLI

After an execution of the PowerShell, all execution messages will be visible in the output file which is similar to the Results window explained earlier:

In case that some error occurs while the execution process is running, an appropriate return code will be shown in ApexSQL Build.

Each alteration in the source control repository will be applied in the process and accurate order for the execution will be provided, regardless of using the project file or individual switches.