Recent to the scene, are a couple of features (tools) have appeared that make monitoring of query performance make easier than it used to be.

In this article, we will discuss the Microsoft SQL Server Query Store (Query Store) feature, then about William Durkin and Enrico van de Laar OpenQueryStore (Open Query Store) feature and, in the end, the Query store feature will be introduced from ApexSQL Plan, a tool for visualizing and viewing SQL Server query execution plans, analyzing and Identifying query performance issues and more.

Here are common scenarios where these features can be useful:

This feature was introduced in SQL Server 2016 CTP2. SQL Server Query Store is available for any SQL Server editions and can be separately enabled for every SQL database using T-SQL code or SQL Server Management Studio (SSMS). On Azure databases, by default the Query Store is enabled. 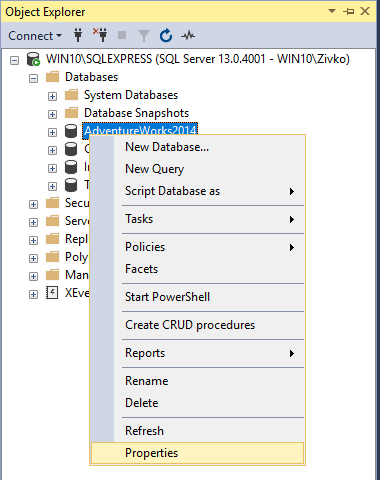 In the Select a page of the Database Properties dialog, choose the Query Store: 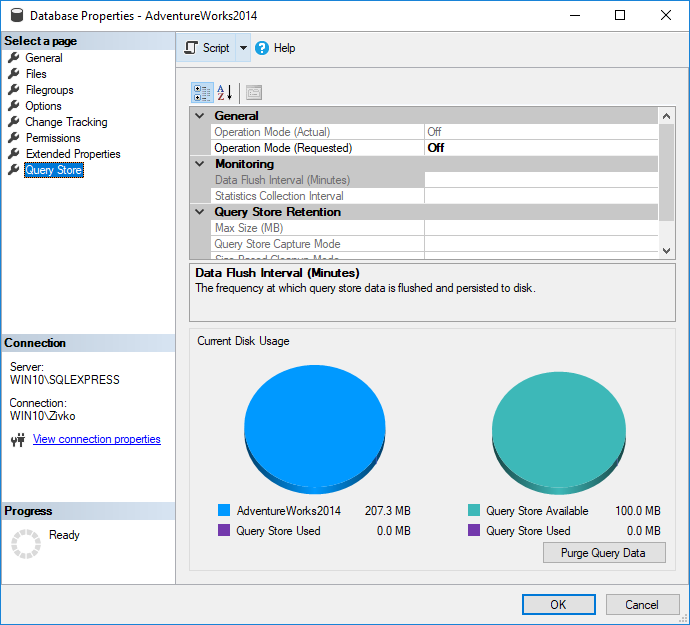 To enable Query Store in the General section under the Operation Mode (Requested) dropdown box, select the Read Write value:

As soon as the Read Write value form the Operation Mode (Requested) dropdown box is chosen the fields under the General, Monitoring and Query Store Retention section will be pre-populated with default values: 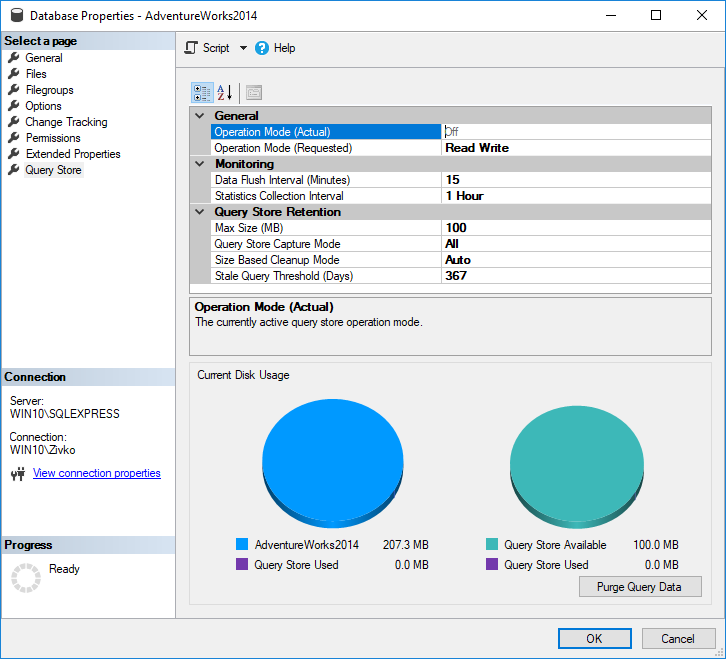 Operation Mode (Actual) determines the state of Query Store and the values in this box cannot be modified. There are three states Off, Read Only and Read Write.

Operation Mode (Requested) has the same options as Operation Mode (Actual), but, here, the chosen value from the dropdown box will have direct impact on the state of SQL Server Query Store:

Query Store Capture Mode – using this option, which queries will be tracked can be configured. There are three values that can be set for this option. 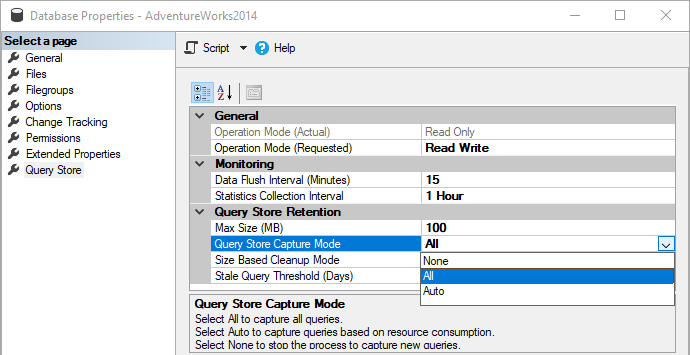 Size Based Cleanup Mode, this option activates the cleanup process when total amount of data reaches up to 90% of capacity set in the Max Size (MB) filed. This process deletes the less expensive and the oldest query data. The cleaning will stop when 80% of the max size is reached. This option by default is set to Auto. When the Off value is chosen, then the cleaning process will not be activated and the Query Store will be go to the Read Only mode, when the max size is achieved: 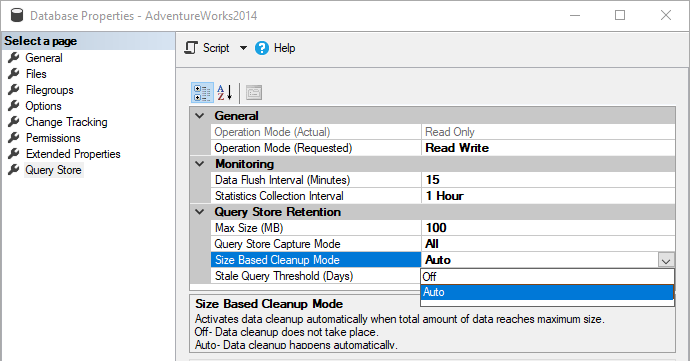 Stale Query Threshold (Days) in this field the number of days can be set to show how long the query store runtime statistics will retain. It is set by default to 30 days: 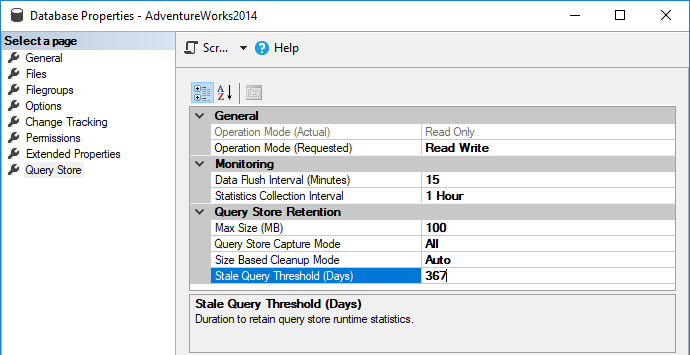 When all options are set, press the OK button on the Database Properties dialog to enable the Query Store to start capturing query execution plans and runtime information. 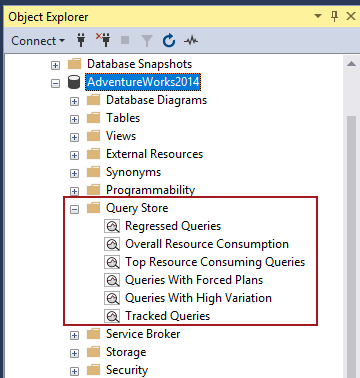 The built-in reports under the Query Store folder will gather all query execution plans and runtime statistics data, analyze them and show that data in the chart or grid format depending on what is set in the reports.

This report shows total resource consumption for the database during specific period of time. This period of time is set by default to last month and results are shown in four charts: CPU Time, Duration, Execution count and Logical Reads: 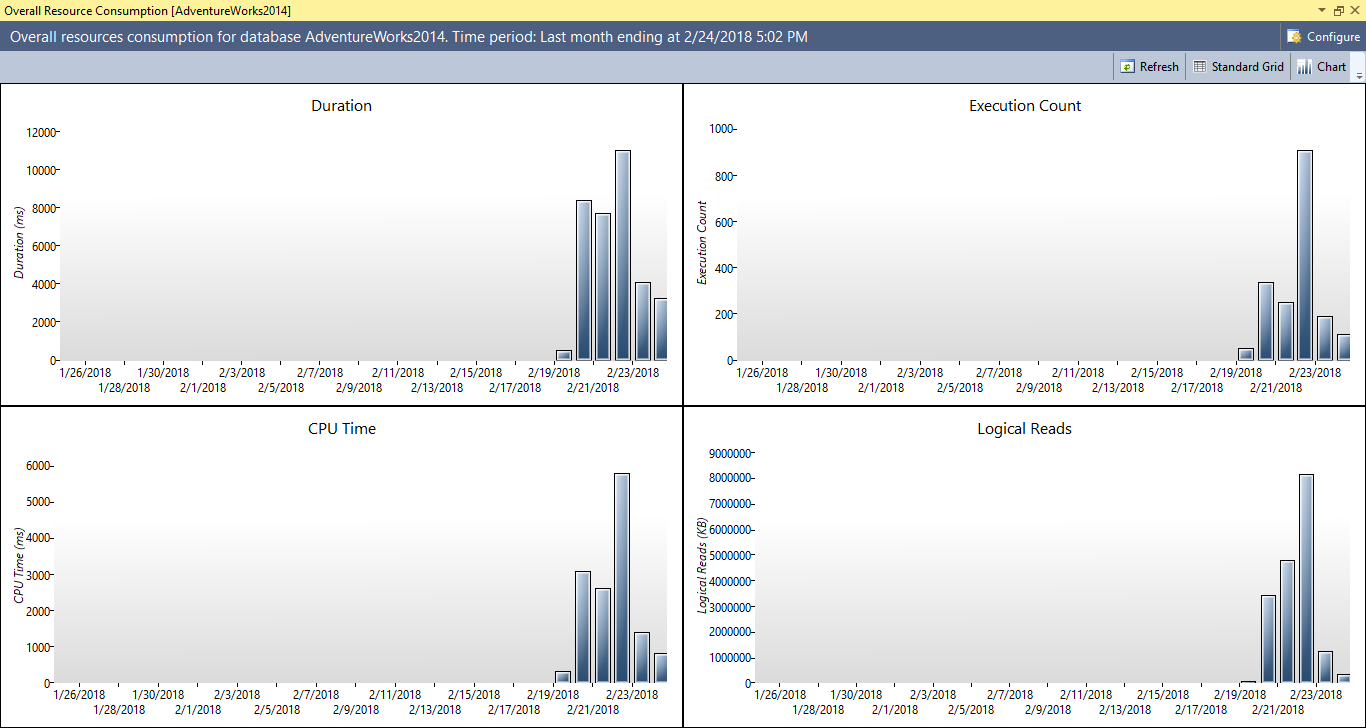 The Top Resource Consuming Queries report shows top 25 queries for specific database that use most of the resources like Physical Reads, CPU Time, Logical Reads etc.:

The Queries With High Variation report helps identifying the queries with the most severe parameterization problems:

The Tracked Queries report can track query execution plans and query runtime statistics for specific query. In the Tracking query box, enter the query id and press the search (green) button next to the box:

There are two different ways to install Open Query Store. One is by using automated setup and other is manually by modifying and executing installation scripts.

Here, manual installation will be explained with the Classic data collection mode.

There is one more data collection mode and that is Centralized mode. This mode is used when want to collect the query runtime execution statistics from multiple databases inside the same SQL Server instance and stored that data in one separate database

All files (scripts) needed for manual installation are located under the setup folder:

The first script from the setup folder that need to be executed as part of the install process is install_open_query_store_base.sql scrpt:

Before executing, in this script, it needs to be modified first. Open the install_open_query_store_base.sql script in SSMS and the values inside the brackets {} replace with appropriate values. For example, the {DatabaseWhereOQSIsRunning} value should be replaced with the database name on which want to install Open Query Store, in this case, that will be the [AdventureWorks2014] database and {OQSMode} value will be replaced with appropriate mode (Classic, Centralized); in this case the Classic mode will be chosen: 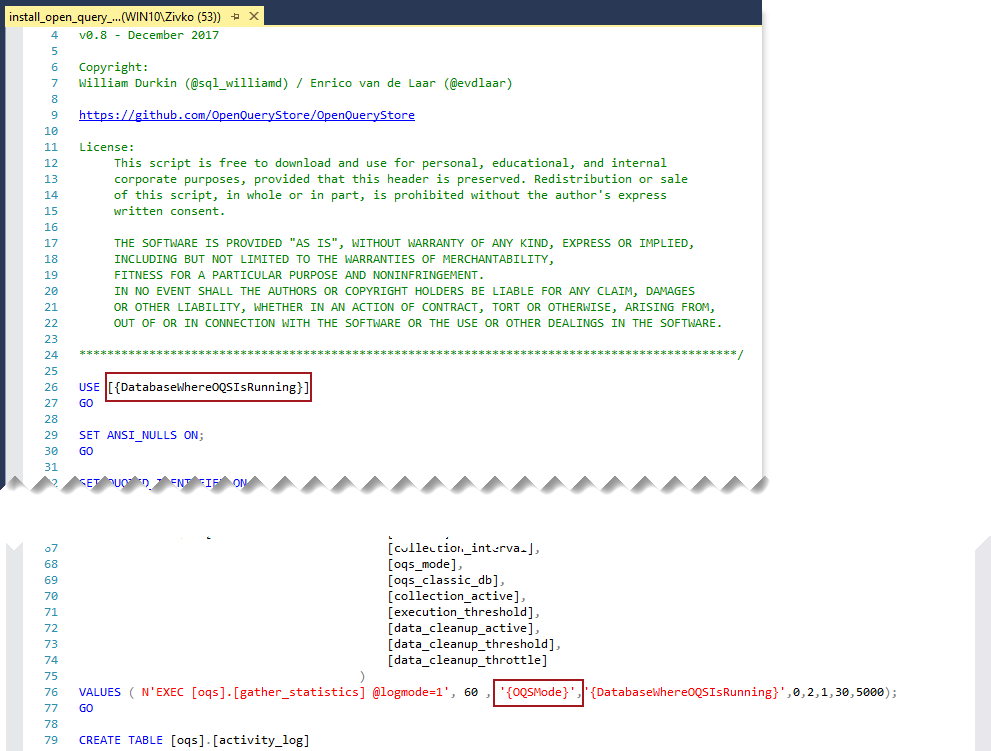 After changing values in the brackets {}, execute the script.

More about Open Query Store can be seen on the OpenQueryStore for SQL Server – Installation and configuration article.

The installation files for the Open Query Store Dashboards are located under the Dashboards folder of the downloaded OpenQueryStore folder:

To install those files, open SSMS 2016 or higher, in Object Explorer, select the database on which is installed Open Query Store, right click, from the context menu, in the Reports submenu, select the Custom Reports option: 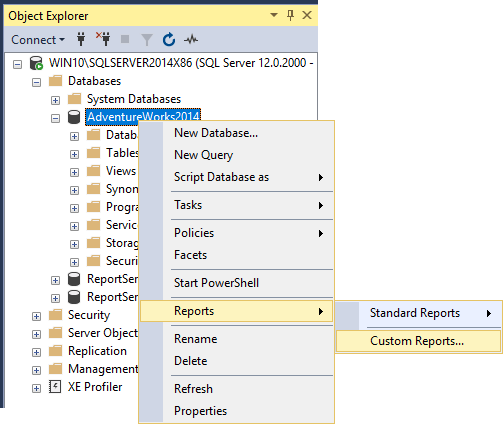 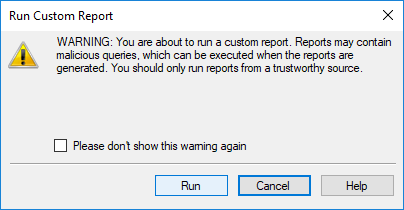 The dashboard will appear with data and charts: 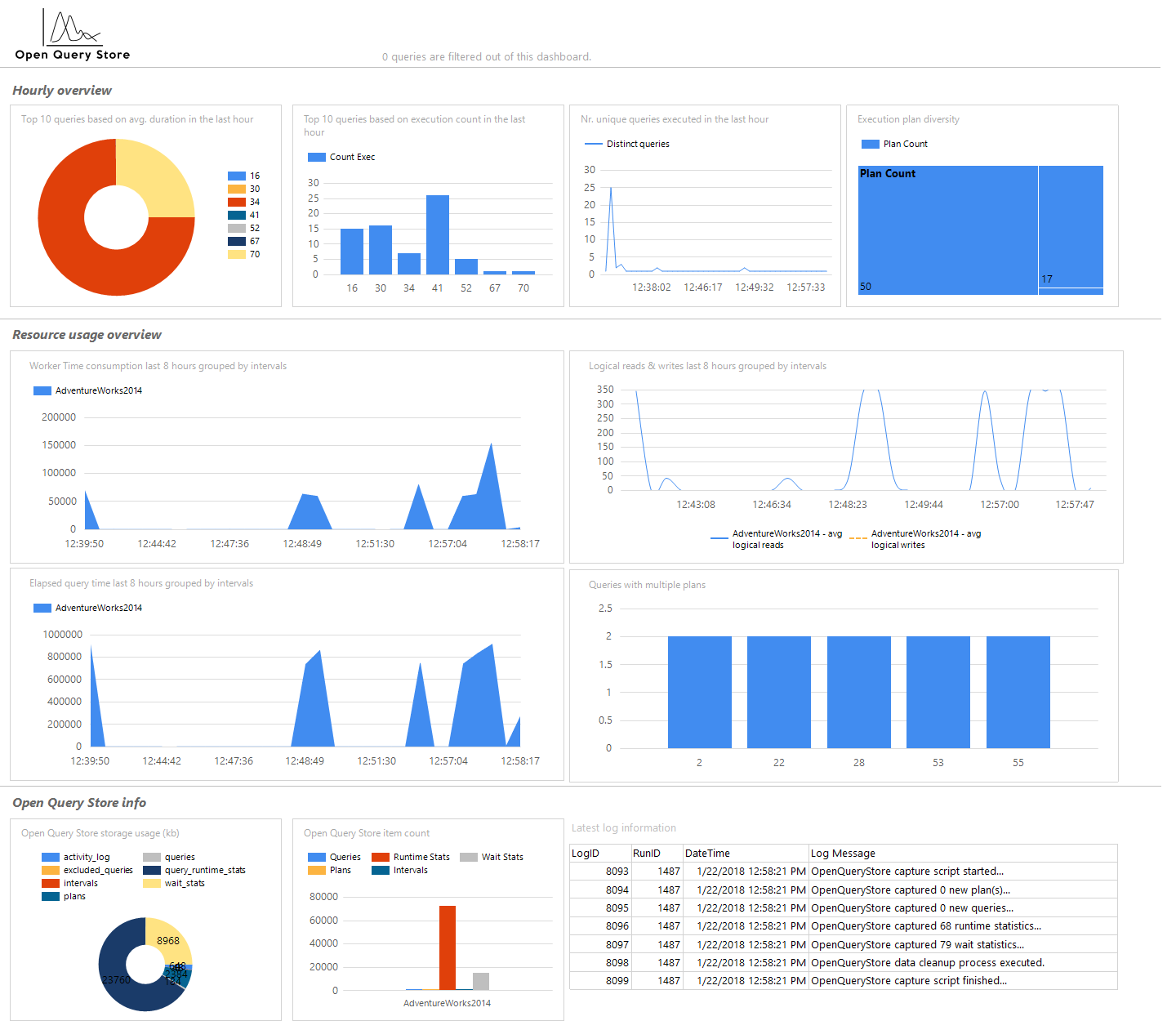 OpenQueryStore Dashboards are available for SSMS 2016 and higher. If you try to install dashboards using SSMS 2014 or SSMS 2012, this info message will appear:

As it is mentioned early in this article, ApexSQL Plan is system, SQL Server, and database performance monitoring and alerting tool, that helps with performance issues detection and analysis.

In the Home tab, click the Query store command:

In the Database connection window, provide appropriate credentials for database on which want to enable Query store and press the OK button: 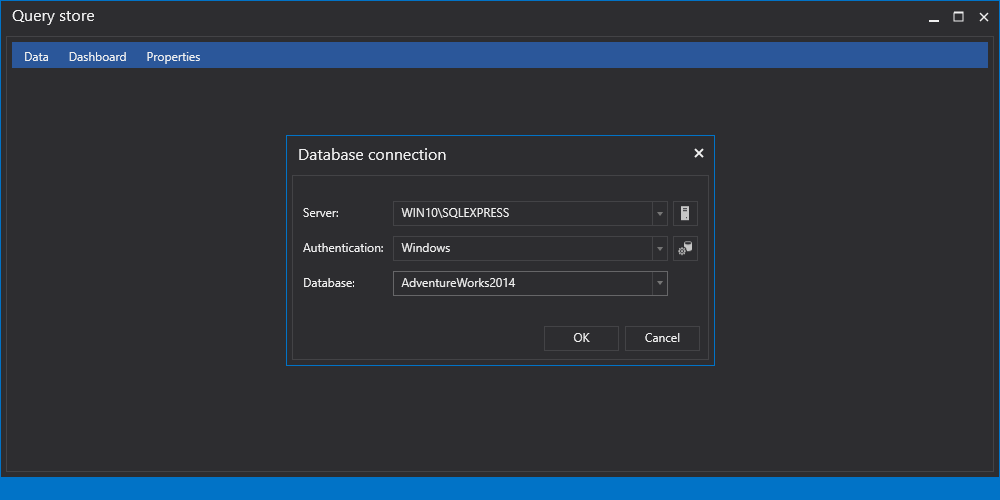 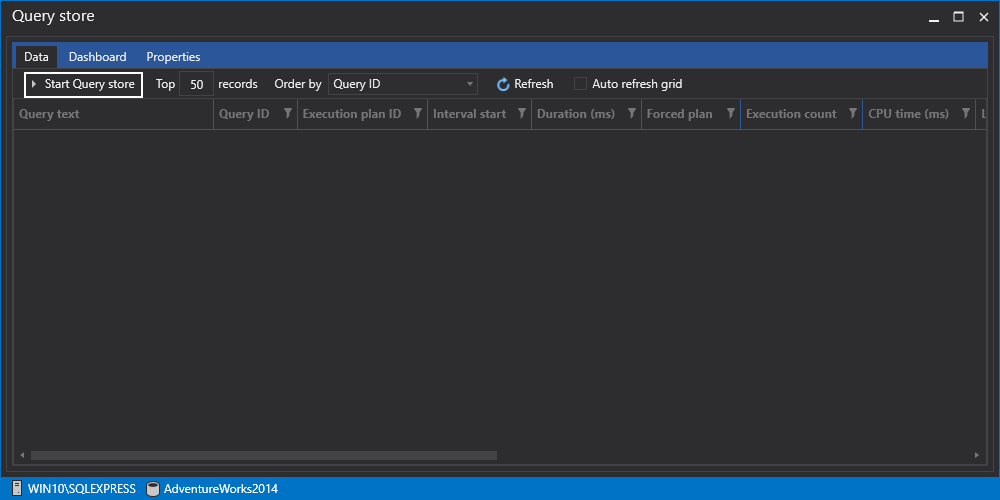 After a while the collected data will start appearing in the Data grid: 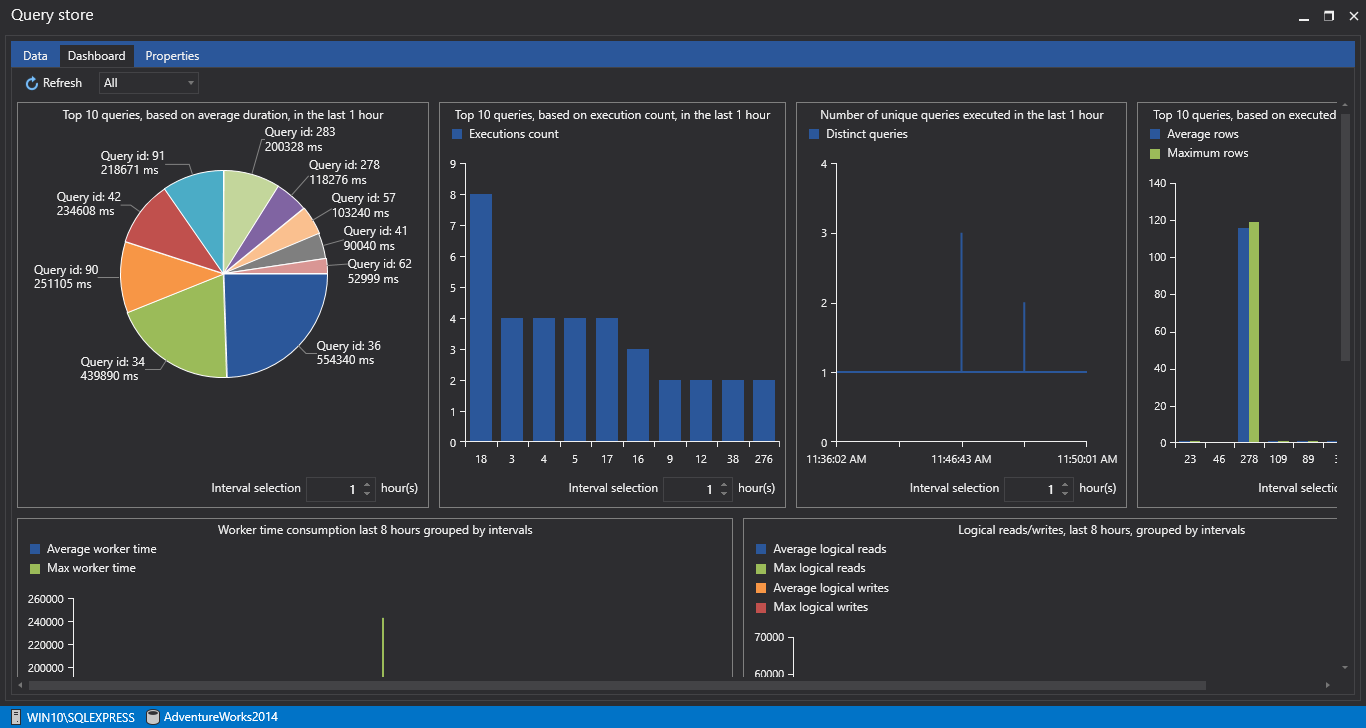 The Query store options can be set under the Properties tab: 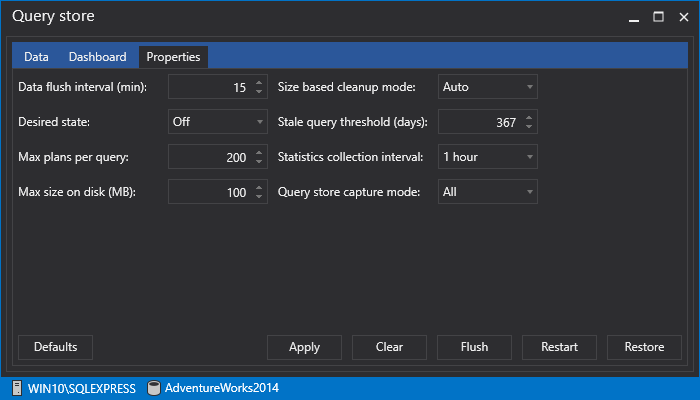