The growing adoption of Continuous Integration development practice implies that developers have to work in a collaborative manner by storing and sharing their source code into a central repository. For SQL Server Business Intelligence (SQL Server BI) developers, the collaboration is usually made possible by the Team Explorer plug-in for Visual Studio which provides an interface for integrating SSRS, SSIS and SSAS solutions into source control environments such as Team Foundation Version Control (TFVC) or Git. However, several aspects of SQL Server BI solutions involve T-SQL development (i.e. defining of SSRS datasets, SSAS data source views, as well as SSIS source data flow tasks).

For most SQL Server BI developers, SQL Server Management Studio (SSMS) is their preferred IDE for T-SQL development instead of Visual Studio. Unfortunately, the integration of SSMS with source control repositories is often not straight forward and often requires several prerequisite software (i.e. MSSCCI Provider, Visual Studio, Team Explorer) to be installed prior to configuring source control. Furthermore, some of the prerequisite software is not compatible with all versions of SSMS and thus you may discover that the prerequisite software itself is dependent on other programs, as is the case in Figure 1 wherein an installation of MSSCCI Provider was unsuccessful because Team Explorer 2013 was not installed.

Even if you were able to satisfy all requirements for integrating SSMS with source control, Team Explorer requires you to script database files prior to checking them into source control. Such a practice could be time-consuming and there is a greater chance that some changes could be missed. To demonstrate the challenge at hand, we will attempt to store a T-SQL function script used to replace ASCII special characters into TFVC: 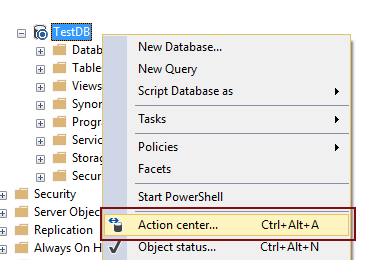 A preview of the Action center tab is shown in Figure 6, which can be docked and pinned like you would any other SQL Server query window.

In addition to taking away the need to use Team Explorer, the Action center tab allows for the tracking of database changes by simply clicking the Refresh button on the top right corner of the Action center tab. Figure 7 shows a pending change containing a SampleASCIIReplace function that has easily been detected by simply clicking the Refresh button. Looking at the Differences section at the bottom of the window you will notice that the Repository side is blank which means the detected function doesn’t exist on source control repository. To add the detected change into source control repository, developers need to just tick the checkbox next to the function Type and proceed to click the Apply button.

Once you have added an object into source control, ApexSQL Source Control provides additional options that you can utilize to further maintain that object including viewing Object history, Check-in or Undo check out/lock. Some of these options are dependent on the database Development model (Dedicated or Shared).