The following recommendations are part of an effective strategy for investigating SQL Server performance issues caused by slow queries:

In this part of the continuous integration aka “CI” workflow, the Unit test step will be described. After the Populate step is successfully finished, where the new database test data is generated, the Test step is initiated, that will use SQL Server unit tests. 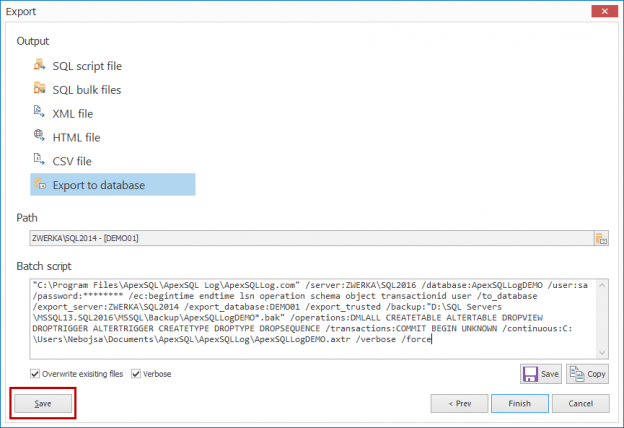 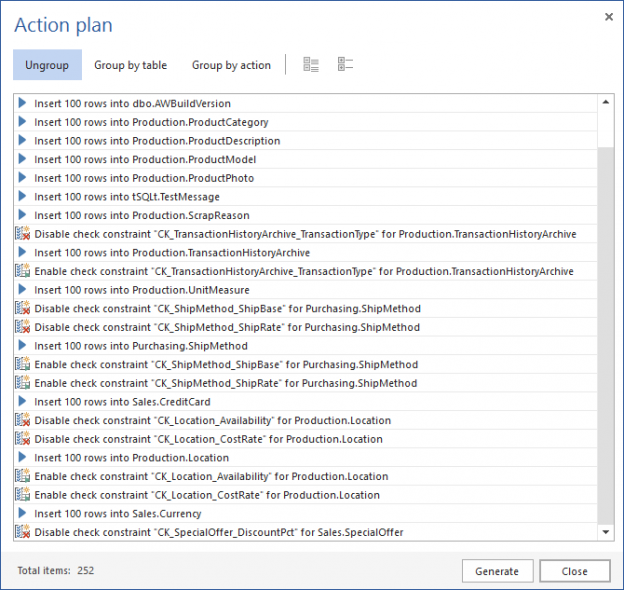 Generating test data for SQL Server database should be a process that easily populates a SQL database with data (where needed). Adding of test data can be done by manually creating scripts or by using a specific tool. But for repeatable processes like continuous delivery (aka DLM, CI, continuous integration), automation of test data generation is an important consideration. 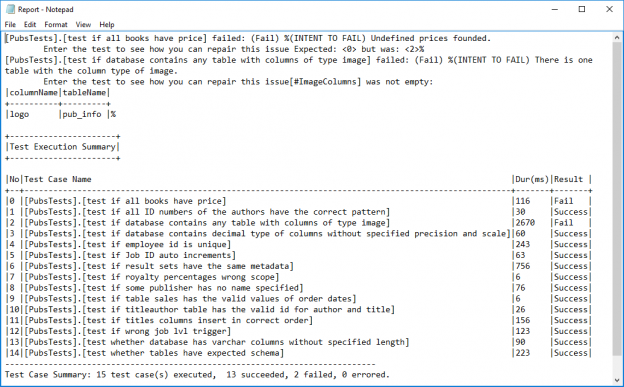 It’s important to run SQL Server database unit tests to ensure that any changes made will not “break” the database or in other words violate the integrity, relationships or the functionality of the database itself. Ideally, many issues can be found in development, even pre-QA, if unit test coverage is created and run early and often. So even though we may understand that running unit tests against database changes is important, we may also experience the fact that creating and running SQL Server database unit tests manually can be time consuming, especially for lager databases which are under active development. 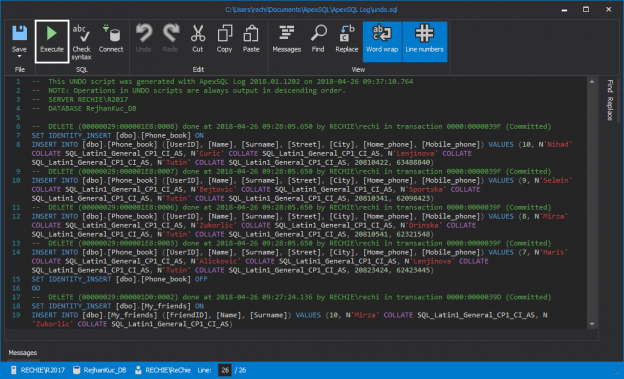 It is not that uncommon to find yourself in a situation when some inadvertent delete operations have deleted important data from a SQL Server database. The highest priority in these situations is to discover what exactly was deleted and how to get the deleted data back as quickly as possible. In this article, we are going to show you how to quickly recover data lost due to inadvertent delete operation using ApexSQL Log and ApexSQL Recover tools. Even though both tools generate the same output, a recovery script which rollbacks unintended deletes, the mechanisms used by them to acquire recovery information and create rollback script are quite different, so if the recovery with one tool doesn’t help, the other tool may. 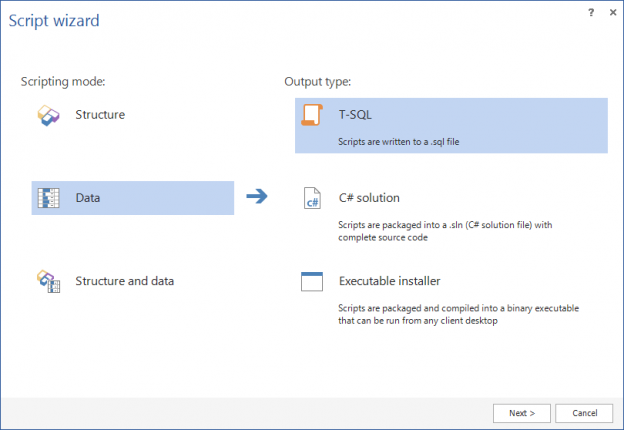 Once a SQL database is committed to a source control repository with all of its objects, the next task is to commit the static data. Static data is non-transactional data from tables that generally don’t change often like postal codes, department names, etc.. Many teams treat this type of data akin to the database structure itself, by versioning it to track changes and deploying it from source control just like database objects. As data is versioned in source control, managing it can be automated as well.

Maintaining a before-and-after audit trail for sensitive tables can be time consuming, especially with a database that is under continuous development, and particularly in teams that use continuous integration. Most table changes will break existing triggers and necessitate their update. The ability to automate the refactoring and re-creation of a trigger based auditing layer, to keep up with underlying database changes, and run this process unattended or as part of a continuous integration process can be a huge time saver.

While Performance Monitor can be used for monitoring performance parameters of SQL Server, it doesn’t provide an option to get notifications when certain performance metrics values breach specified thresholds. The main reason why this is important is to be able to identify SQL Server performance issues as soon as possible, and react before they affect too many users. In addition, notifications on potential SQL Server performance issues could help avoid more serious problems by forecasting when they are likely to occur in order to avoid them. Therefore, one of the primary tasks for the database administrator is to establish a system that will ensure that he/she is going to be notified in case when certain performance metrics values are beyond the expected/desired range 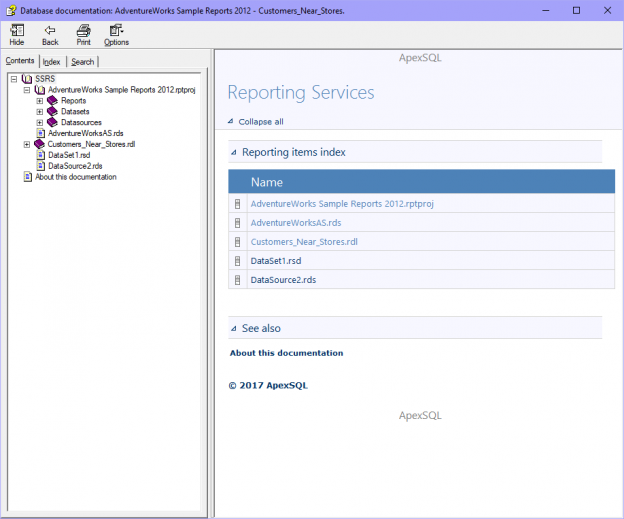 In this article, the last step of SQL Server database continuous integration (CI) workflow, or the first step of a continuous delivery (CD) workflow) the Sync step.

In the previous article, the Test step described how to create and run unit tests against a database. If all tests are passed, the tested database can be compared to a final QA environment or even Production databases, and a synchronization script will be created to publish the changes.

When working with a large number of databases on multiple SQL Servers, creating a foolproof disaster recovery plan can be challenging. Well organized backup and restore strategies will definitely help with this. In order to successfully implement these strategies in a larger environment, configuring automated backup and restore processes is a must. Some database administrators use the batch or power shell scripts for automation, while others prefer to use various 3rd party solutions. In both cases, it is necessary to format database backup names properly. Properly formatted backup names make the job of organizing and maintaining the backup sets much easier. Old backup files are usually obsolete, and they can be easily identified and deleted from the drive either manually, or by using a script.

Deleting or changing objects may affect other database objects like views or procedures that depends on them and in certain instances, can “break” the depending object. An example can be that if a View queries a table and the name of that table changes. The View will no longer function.

In the third part of the continuous integration aka “CI” workflow, the Populate step will be described.

After the Build step is successfully finished, where a new database is built directly from latest changes in source control, the Populate step is initiated. In this step, non static tables in the newly built database from the source control repository will be populated with test data.

The AlwaysOn Availability Group was introduced as a new feature in the SQL Server 2012 Enterprise edition and is designed to ensure a more advanced and reliable option for SQL Server high availability and disaster recovery. 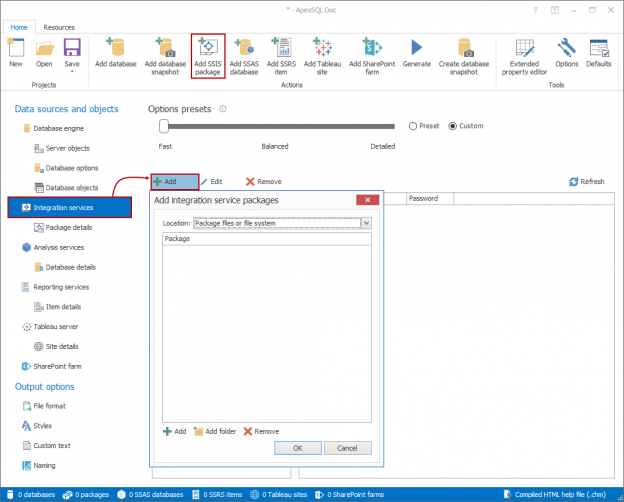 ApexSQL Doc is a tool that is used for SQL Server database documentation as well as SSIS packages, SSRS reports, SSAS cubes, Tableau sites and SharePoint farms. With ApexSQL Doc it’s possible to specify the exact server objects, attributes, database objects and specific object instances that can be generated in the documentation.